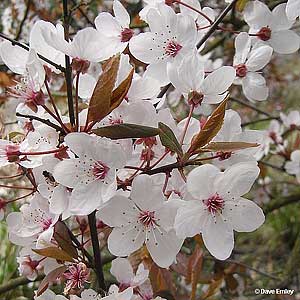 Cherry Plum is one of the first trees to flower in the UK, coming out even before the Blackthorn Prunus spinosa. It is a popular plant in gardens being grown for its early flowers which come out long before the leaves. The flowers are 5-petalled on short stalks, 5-15 mm long. The fruit is spherical, yellow or reddish, cherry-sized, but is only produced in favourable years.

Numerous cultivars have been produced, many for their dark foliage which contrasts with the pale flowers which can be white or pink.

The form illustrated below is Prunus cerasifera 'Nigra'