There was once a railway station at Madeley village - it was called Keele. And there was also, briefly, a station called Keele Park for the convenience of race-goers to the Keele Park racecourse. It was possible to travel to Keele by train until May 1956. 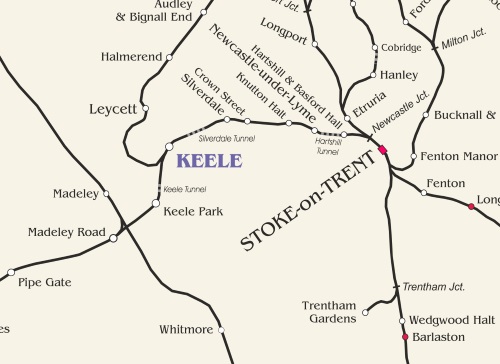 The Market Drayton branch railway opened in sections, with Stoke on Trent to Newcastle-under-Lyme being the first to open on the 6 September 1852. This was followed eleven years later by the Newcastle to Silverdale section in May of 1863. It wasn't until the 1st of February 1870 that the connection to Market Drayton was completed, giving Madeley an east-west route. Although initially the line was double track, it was converted to single track in 1934. ‌‌‌

Passenger services were withdrawn on May 6 1956 and the Silverdale to Stoke on Trent section closed on 2 March 1964. Keele Station was closed in 1961. It was finally closed to goods trains on the 9 January 1967, although coal trains still ran from Silverdale Colliery to Madeley Road and onto the former LNWR line. With the closure of Silverdale colliery in 1998, all traffic on this line ceased.

A map of the Market Drayton branch line places Keele Park between Keele Station and Madeley Road - presumably, it was open only while the racecourse existed.

Image right: Close up of Keele section of the Railway Map of Cheshire and North Staffordshire, used with permission of the designer Nigel Kirby, Ribble Valley Rail User Group, 2016

Ieuan Smith's slideshow of photos from his visit in 2016

Whatever happened to the Keele Railway Station signs? 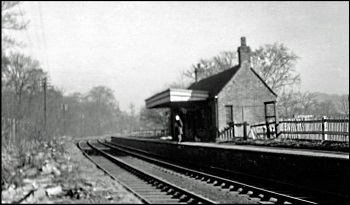 ‌‌"I remember that Keele Station became derelict when the Newcastle to Market Drayton branch line closed to passenger traffic in May 1956. Although the station was a mile or so out of the village on the road to Madeley, the distance didn't deter me from my quest to acquire a souvenir of my time at Keele. I lived in Hut 40 (the 'top hut' in more ways than one) just below the professorial houses, which was handy for a home run down the drive from the village. The operation was planned in advance and in daylight and I found that there were two iron station signs which were attached by bolts to wooden frames and which would require some strength to remove them. I believe that there was also a much larger wooden sign which would have required a horse and cart to carry it away.

On the following night, which was suitably dark, cold and wet, I set off with my good friend Roger Halls (1959) to help me wrench a sign off its board and carry it home. It came as somewhat of a surprise to discover that someone had been there before us and one of the signs had already gone. You can't trust anybody, can you? We removed the remaining sign and bore the loot away between us. Roger Halls at Keele Station 1956Had we just tucked it under our arms and strolled home I don't suppose that anyone would have given us a second glance. However, a heightened sense of drama and guilt made us skulk along the country road trying to look innocent whenever we were caught in the headlights of passing cars. However, we made it back safely to Hut 40 where it hung on the wall of my room. But who has the other sign? There's another mystery."

Photo above right: "This is a 'snapshot' of Roger Halls (1959) on the platform when we did a recce prior to rescuing the station sign. The line's recorded as being closed to passengers on 6 May, 1956, but I'm sure that we didn't hear of it until October - the autumn term." 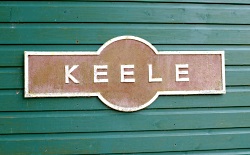 Peter adds, "The sign is a precious possession. When first acquired, it was hung high on the wall in my room in hut 40, except during the vacs, when it was locked securely in a cupboard. My final year was spent in one of the newly-built houses at the Hawthorns, and the sign stayed at my parents' home. After I got married it lived out of doors in places such as on a fence in our orchard in Northumberland, and for the last twenty years, it's hung on a wall of my workshop."

Photo above left: The Keele railway Station sign was acquired in 1956 and photographed in 2016 by Peter Maybank (1959)

"I was in the Hawthorns 1956-60 and we (including the late Ken Plampin) commandeered the KEELE railway sign from platform approach in 1958. Ken brought it to our shared room and it was secreted under my mattress in the old house for months before someone ' pinched' it in 1957/58. It was never seen by me again. To this day I do not where it went or where it is."

This site is about the North Staffordshire Railway, including the Stoke to Market Drayton line. In the section 'The Local Services and Closed Lines' it says Keele had 6 daily services in 1887, dropping to 2 in 1947. There are photos of Keele station - including one of a train standing at the Keele station platform in 1954 in this History of Madeley Village. 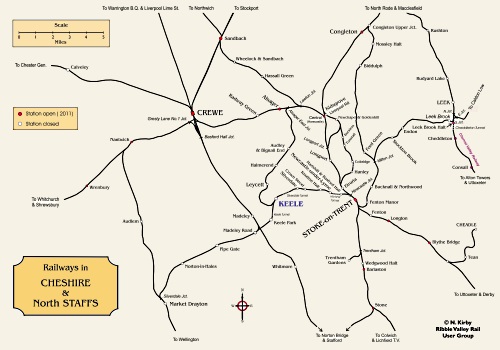 "This photograph shows the locomotive plate 'Keele Hall'. There were, of course, two nameplates - one on each side. I am reasonably sure that one nameplate hung in either the Geology or Biology departments at Keele University. When the professor died his family kept the nameplate. It is possible that this mine is the "opposite side" and the family still owns the other one. The engine number was 5903 and I have a good picture of it when it was first built. This plate hangs in my garden with another engine nameplate - 46 Squadron. This was one of 25 named after the RAF squadrons which defended London in the Blitz - hence the Class name was "Battle of Britain". My father served in No 46 Squadron during the War."

Photo below left: "This is the Keele Hall locomotive at Nyland, South Wales" Phil Soar (1969) 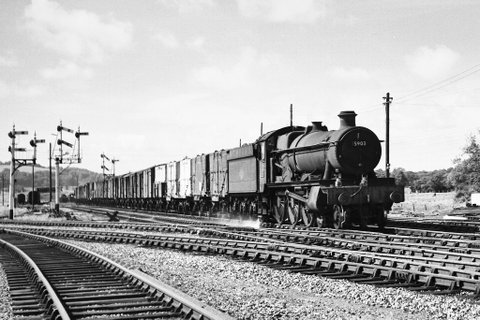 "I can fill in a little detail. The nameplate was obtained in about 1963 from Swindon by Professor Stanley Beaver, who was the founding professor of Geography. For many years it was affixed to a wall in the Geography Department (the present Hornbeam Building). In the 1990s, while the University deliberated over the future of both the Geography Department and the building, the nameplate was removed for safekeeping, and placed in the University's art store. Subsequently, it was returned to the Beaver family."

The Keele estate also had another station, not to be confused with Keele station, to serve Keele Park racecourse. The racecourse operated from 1895 to 1906 and was located to the right of Clockhouse Drive, beyond the present route of the M6, with the main buildings near the present motorway services area. Keele Park station opened in 1896 and closed in March 1907. ‌Keele Park Race station linked to the Newcastle to Market Drayton railway line and stood adjacent to Stoneylow Farm.