Keele Park Station and The Gables House - is this where Keele University was born? 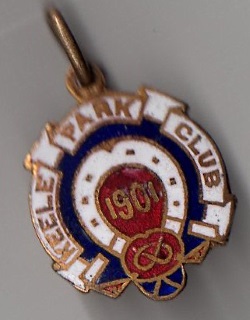 Keele Park racecourse operated from 1895 to 1906 and was located to the right of Clockhouse Drive, beyond the present route of the M6, with the main buildings near the present motorway services area.

‌The racecourse was opened by Colonel "Sporting" Ralph Sneyd, who had inherited the estate in 1890. Ralph also converted the Clock House stables and carriage houses into a racing stables. ‌The original Keele Park racecourse licence was taken over later by Uttoxeter racecourse, which opened in 1907.

Above: This racecourse members' badge is numbered 89 and would have entitled a gentlemen member of the Keele Park Club to attend all racing events at Keele Park in 1901. Image and text courtesy of Mr John Slusar.

In the map to the left, drawn by Heritage Guide Ieuan Smith (2015), the blue line represents the line of the M6 which opened in 1962. The red circle shows The Gables House near the present site of the M6 services and the green circle is Racecourse Farm. The racecourse is clearly visible as a large oval in the centre.

The Keele estate had its own railway station called Keele, Keele Park Race station was added later on the Newcastle to Market Drayton railway line to make the racecourse more accessible to racegoers. Keele Park station opened in 1896 and closed in March 1907, coinciding with the operation of the racecourse. It stood adjacent to Stoneylow Farm.

This clock on the mantelpiece in the Sneyd room was donated by Timothy Joy in 2017. The clock was presented by Ralph Sneyd to one of his staff in 1901 as indicated on the attached copper plate. The full inscription reads; "Presented together with a purse of gold to WILLIAM BRITTON, Stud Groom to Ralph Sneyd Esq, by his friends as a token of esteem on his leaving Keele. 17th September 1901." 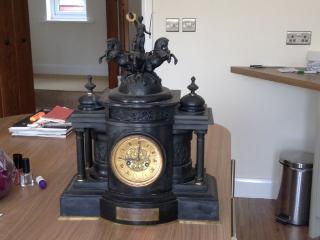 Mr Joy says: "The clock was purchased at a sale in Newmarket, Suffolk, the "home of racing", so Mr Britton may have moved on to another position at a stud down there or perhaps even retired to the town. At any rate, the clock is in good working order though we seem to have lost the key"

The date on the clock coincides with the existence of the Keele Park Racecourse so we might assume that William Britton was involved in that enterprise.

The Gables - birthplace of Keele University?

There was a stand for racegoers on the grounds of The Gables house on Three Mile Lane, which is said to have been dismantled and relocated later to Uttoxeter Race Course. 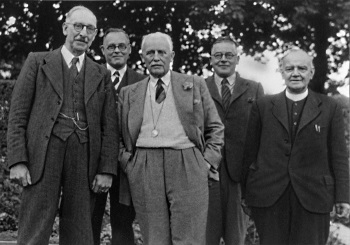 Ralph Sneyd's Land Agent, John Goodwin, lived in The Gables and when Ralph Sneyd visited Keele Hall (he mainly lived in Wiltshire) he would stay at The Gables.

At the end of the Second World War, the final negotiations for the sale of Keele Hall and grounds for what is now Keele University took place at The Gables and the contract was signed in the front lounge.

This photograph of Ralph Sneyd with the Burgesses of Stoke on Trent (who agreed to buy the property to found the University College of North Staffordshire) was taken on the front lawn. Ralph Sneyd died in 1949 and Gables house was sold by his executors in 1951, with the remainder of the Keele Estates being sold later that year.

"Photograph taken 22nd September 1947, at "The Gables", Keele. This was the historic meeting at which it was decided to purchase Keele Hall for the University College. The persons in the photograph are: 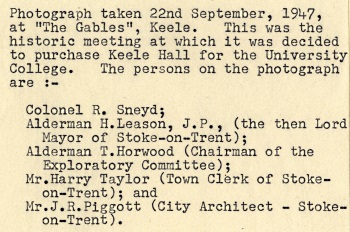 Did you enjoy this? Read more about Railways at Keele.