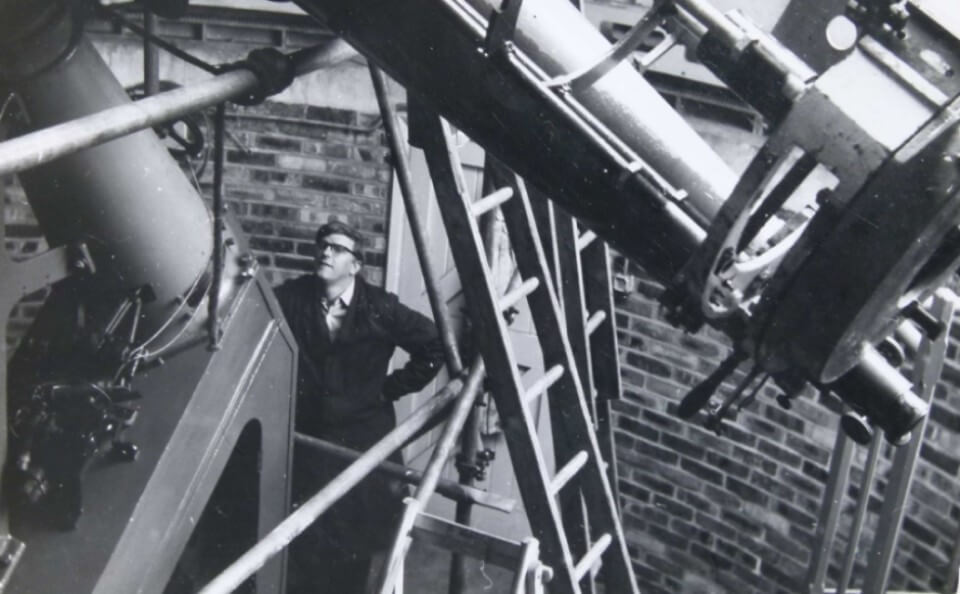 Heartfelt tributes have been paid to the founder and inaugural Director of Keele Observatory who has died following a short illness.

Dr Ron Maddison, who died on December 29 aged 84, was one of Keele University’s first students and was instrumental in founding the Observatory in 1962, sourcing the original Grubb telescope from Oxford University.

Ron worked at Keele as a Senior Lecturer in Physics until 1991, when he left to take up a position as Director of the Observatory at the Astronaut Memorial Planetarium and Observatory in Cocoa, Florida, where he continued to live until his death.

In the 1960s, when all Keele undergraduate students studied both a science and a non-science subject, Ron established the first-year “Subsidiary Astronomy” course, which was immensely popular from the outset and a big hit with non-science students. For many of them, it was their first encounter with science since their early school years.

A frequent guest on the BBC’s “Sky at Night”, Ron also had a life-long friendship with the late Patrick Moore. He was also a solar eclipse chaser, and spent many summers lecturing on astronomy to passengers on cruise liners.

Ron served as the Director of the British Astronomical Association between 1968 and 1971, and was a renowned academic who published several books on astronomy.

A citation of his work on the British Astronomical Association website reads:

“Dr R. C. Maddison was a professional astronomer employed in the Department of Physics of the University of Keele. He assumed the directorship at a difficult time, when results from Orbiter and other space probes were altering the nature of amateur lunar observation and the old cartographical approach was being supplanted by new methodologies.

“Ron Maddison recognised the shift that was taking place, and he undertook a major review of the Section observing programme in order to ensure that it remained relevant in the years that were to culminate in the Apollo manned Moon landings.”

Dr Jacco van Loon, the current Director of Keele Observatory said: “Ron has left a legacy in the form of a unique facility to bring astronomy to the public. His vision to adopt the large historical refractor was instrumental in establishing an Observatory at Keele, which he had meant first and foremost to serve students and the general public.

“Tens of thousands of people have since looked through the refractor, many of whom will have been transformed in their perception of our place in the cosmos. Ron also pursued the cause for the refractor to be reunited with the lens of the astrograph it used to carry, which played a pivotal role in confirming Einstein’s theory of General Relativity during the famous 1919 solar eclipse.”