India: how some Hindu nationalists are rewriting caste history in the name of decolonisation 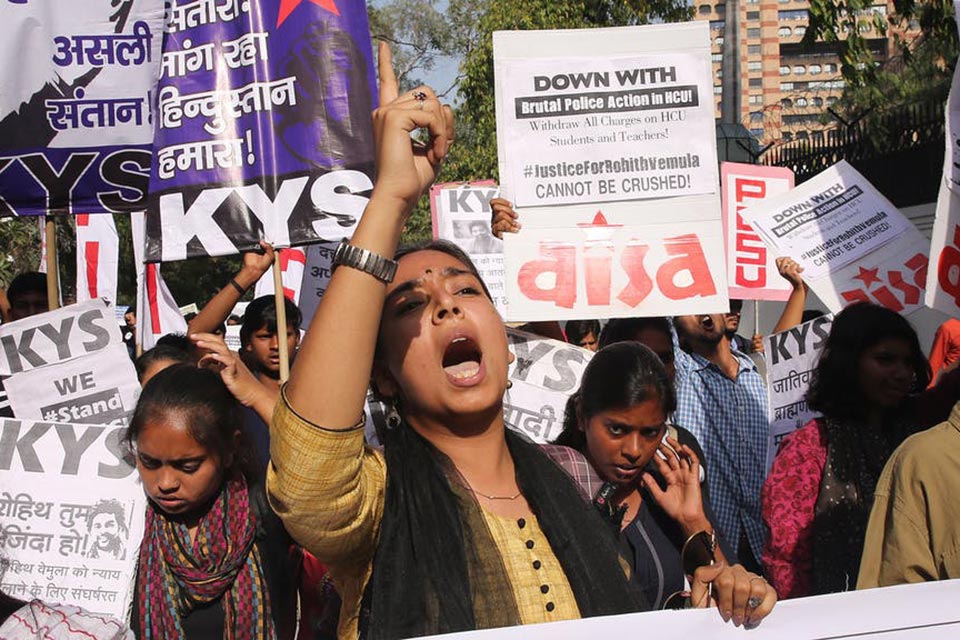 With India in the middle of the world’s largest democratic exercise, universities are under the spotlight as never before. Over the past five years – as the Bharatiya Janata Party (BJP) led by the prime minister, Narendra Modi, has driven forward an agenda of Hindu nationalism – university campuses have been caught in the crossfire.

Some commentators have even wondered whether the aspiration of the founding fathers of modern India – the ideals of a secular, egalitarian republic – will endure much longer under the “saffronisation of education”.

In 2017, the Universities Grants Commission – the higher education arm of the Indian government – pitched into the debate by insisting that 40,000 colleges across the country show a live transmission of the prime minister’s speech on the occasion of the centenary anniversary of the founder of the BJP, Deendayal Upadhyaya. In autumn 2018, Hindu nationalists in Ahmedabad protested against the appointment of eminent Indian historian, Ramachandra Guha, on the grounds that he was “anti-national”. He later said he wouldn’t take up the post.

But most alarming of all is how Indian universities have become caught up in the communal and caste politics of Hindu nationalist populism, also known as “Hindutva”.

In January 2016, Rohith Vemula, a Dalit student and anti-Hindutva activist at Hyderabad University, took his own life following an incident in which he and his fellow protesters were suspended from the university. Vemula’s death sparked a widespread reaction across Indian campuses. Universities were supposed to be delivering equality and religious tolerance, yet here was a wake-up call that low-caste – and in other cases Muslim – students were facing institutional discrimination.

In fact, despite paying lip service to uplifting so-called lower castes in the run-up to the 2019 general election, denying the inequality inherent in the caste system has become a long-term clarion call for the BJP, the Rashstriya Swayamsevak Sangh (RSS) and the militant youth wing, the Akhil Bharatiya Vidyarthi Parishad, that it has spawned.

Hindutva activists have challenged the legitimacy of what are called caste reservations through which lower-caste groups benefit from quotas in the civil service and education. At independence in 1947, such reservations were a cardinal principle of the new state, compensating for the thousands of years of caste deprivation, a culture in which the so-called “untouchables” (those outside the caste system) could only work impure trades – cleaning, including manual removal of domestic sewage, leather tanning, and corpse removal.

Yet, alongside a wider push to “decolonise” the education curriculum, Hindutva ideologues in India and the West, have gone into combat against caste reservations. They have done so by re-appropriating history: by claiming that the caste system was a colonial construction or a result of foreign “invasion”. In 2015, Mohan Bhagwat, the leader of the RSS, called for a review of caste reservation policy.

Mechanisms of governance such as the census and codification of laws under colonial rule undeniably led to a proliferation of political identities based on religious or caste affiliation in colonial India. But many scholars insist that it is historically inaccurate to claim that castes and a system of caste hierarchy did not exist before colonial rule.

According to Hindutva supporters, in perpetuating caste reservations previous Indian governments since 1947 have maintained this colonial system. To “decolonise India”, as Modi’s intellectual cheerleaders describe their project, means removing the caste system as part of a wider move of ridding India of the vestiges of the British colonial system.

Some Indian scholars, working at Ghent in Belgium and in Karnataka in south-west India, have joined in this spurious decolonisation agenda, purporting to free modern Indians from their former rulers, Mughal (aka Muslim) “invaders” and British (aka Christian) “invaders”. Central to Hindutva is the idea that Indian religions are those born in India – and thus Hinduism, Sikhism, Buddhism, Jainism fall into this bracket. But followers of Islam or Christianity pray to a foreign religion and so are considered by some to be outside the Hindu nationalist fold.

History books in schools are being rewritten to minimise the contribution of Muslims, while predominantly Muslim cities such as Allahabad and streets in countless towns are being renamed with more “appropriate” Hindu titles. Heroic founders of the new India, such as Mahatma Gandhi, are now being reassessed as divisive figures who undermined Hindu unity.

All this is deeply antithetical to current global attempts to rethink and overturn social inequality and communal conflict. So it is ironic that the language of “decolonisation” in India now means something completely different to similarly named movements in the UK and South Africa that aim to “decolonise” educational culture and public life. An ideological sea-change is taking place. In India, “decolonisation” has become the rhetoric of militant nationalism.

Listen to part two of The Conversation’s podcast series on India about Hindu nationalism from The Anthill.