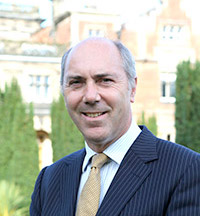 Professor Jonathan Wastling took up his position as Pro Vice-Chancellor and Executive Dean for Natural Sciences in March 2015 after moving from the University of Liverpool. As well as taking overall responsibility for Natural Sciences http://www.keele.ac.uk/natsci/ he has a University-wide brief for postgraduate studies and is Director of the Institute of Liberal Arts and Sciences (ILAS) http://www.keele.ac.uk/ilas/ , a cross-campus Institute committed to promoting interdisciplinary working and advanced studies.

As Executive Dean for Natural Sciences he leads a Faculty focused on delivering high quality research and teaching, with 8 of the Faculty’s 10 teaching disciplines ranked in the top ten and three rated number one in the 2015 National Students Satisfaction Survey. Professor Wastling continues an active research portfolio in host-pathogen biology and is currently funded by BBSRC. He is the author of over 100 peer reviewed scientific publications and 8 book chapters in the area of zoonotic infections and emerging infectious disease, spanning work on Cryptosporidium parasites and the Ebola virus.

Professor Wastling holds a joint Honours BSc in Chemistry and Biology from Keele University and a PhD from the University of Aberdeen. He began his career as a Government Scientist at the Moredun Research Institute, Edinburgh, were he worked on the development of novel vaccines for farm animals, before moving as a Research Fellow to the Faculty of Veterinary Medicine at the University of Edinburgh. In 1995 he was awarded a Personal Research Fellowship by the Royal Society of Edinburgh to work at the Centre for Tropical Veterinary Medicine, later taking his Fellowship to the University of Glasgow where he developed pioneering technologies to help understand fundamental mechanisms of host-pathogen interactions. In 2004 he joined the Faculty of Veterinary Science at Liverpool University where he was appointed to a Personal Chair in 2008, taking up the position of Head of the Department of Veterinary Preclinical Science. In 2011 Professor Wastling became Head of the Department of Infection Biology in the newly formed Institute for Infection and Global Health, leading the development of a new department with an international reputation in veterinary infectious disease.

Professor Wastling is a member of BBSRC’s Agriculture and Food Security Strategic Advisory Panel, advising on aspects of animal health, welfare and food security and is an Editor of Parasitology. He also has a strong interest in the role of higher education in international development, serving for six years as a Government appointed Commissioner at the UK Commonwealth Scholarship Commission and as Chair of Awards Policy.