Interim Executive Dean of the Faculty of Humanities and Social Sciences 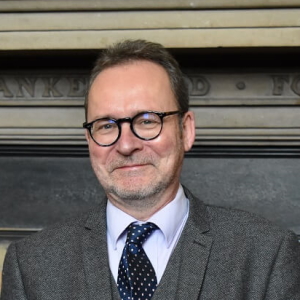 Tim Lustig was appointed Interim Executive Dean in September 2021 when the former Executive Dean, Professor Shane O’Neill, assumed the role of Senior Vice-Principal at the University of Dundee. As Interim Executive Dean, he leads the Faculty of Humanities and Social Sciences (http://www.keele.ac.uk/hss/), taking overall responsibility for: the strategic management of the Faculty’s research and education portfolios; ensuring a high-quality experience for all students and members of staff; furthering external partnerships and collaborations that serve the needs of our local communities and the wider world; and supporting colleagues in the Faculty to maximise the impact of their educational and scholarly activities.

Tim joined the University of Keele in 1993 as Lecturer in American Studies. He became a Professor of Literary Studies in 2020 having been Head of the School of Humanities from 2016 to 2019. He was Interim Director of the Keele Business School in 2020. Since 2019 he has been Dean of Education for the Faculty.

As an undergraduate, Tim studied for a degree in English and Related Literatures at the University of York, graduating in 1984. He moved to the University of Cambridge to undertake doctoral studies in Clare Hall, and was supervised by the eminent Americanist Professor Tony Tanner. His PhD dissertation on Henry James became his first monograph, Henry James and the Ghostly (1995). He is also a novelist and an author of creative non-fiction. Henry James remains among his primary research interests and he has edited scholarly editions of James’s work for Oxford University Press and, most recently, Cambridge University Press. Tim's next major project will be an edition of James’s short stories for Cambridge University Press. He has also published essays on a range of American writers including Mark Twain, Tim O’Brien and Richard Powers. He is a member of the editorial board of the Henry James Review. He continues to teach undergraduate students and a particular interest in recent years has been children’s literature in the 'golden age' period (1880-1930). Tim has been the first supervisor for 8 PhD students who have completed dissertations on a range of topics in British and American literature and creative writing.