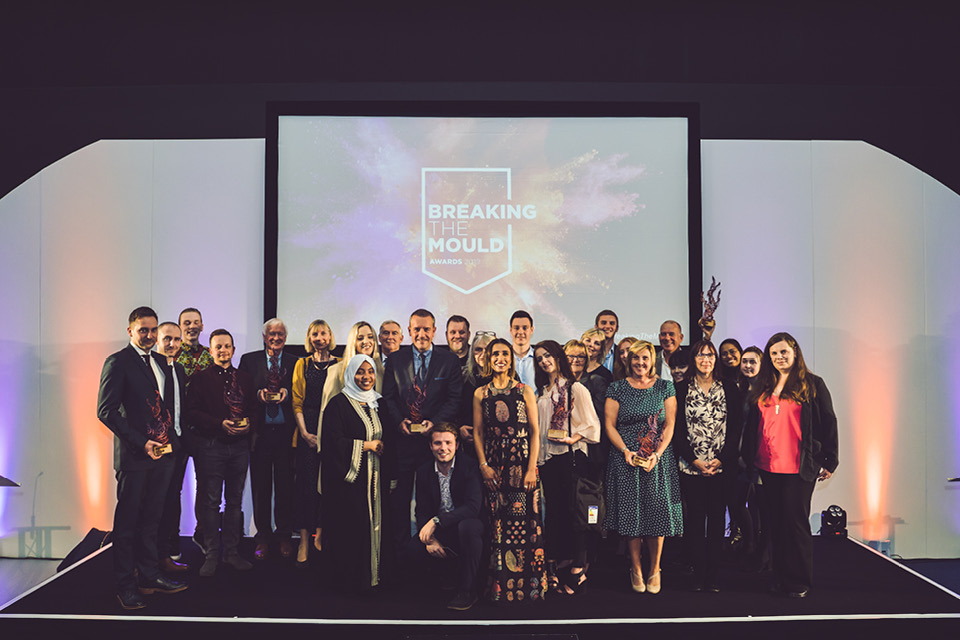 Some of the most exciting organisations in Stoke-on-Trent and Staffordshire have been recognised for their success in collaborative innovation, as Keele University hosted the inaugural Breaking the Mould awards.

More than 200 business leaders, entrepreneurs and industry representatives filled the brand new, Smart Innovation Hub on Thursday (17 October 2019) for a business awards celebration like no other.

The evening was hosted by award-winning TV presenter Anita Rani, and featured energetic performances from Spark! and the Up Men Choir, as well as a recital from Stoke-on-Trent Poet Laureate Stephen Seabridge who delivered a poem that was specially-commissioned for the awards. The award sculptures for the evening were designed and made by local artist Richard Redwin using waste materials reclaimed from Smart Innovation Hub.

Almost 70 nominations were received for the eight awards available, the winners of which were announced as:

Professor Trevor McMillan, Vice-Chancellor of Keele University, said: “Our Breaking the Mould awards have not only provided a fantastic celebration of local business but have also enabled us to focus on the innovative partnerships we have with these organisations.

“We are living through a time of rapid technological change and some of Keele’s academics, and the businesses we work with, are at the forefront of this innovation, and as such are already breaking the mould.

“Breaking the Mould is also about putting our values as an institution centre stage and working with those individuals and organisations who share them, for the benefit of the local region and beyond.

To find out more about the Breaking the Mould awards, please visit keele.ac.uk/breakingthemould.

*The Keele University Science and Innovation Park Smart Innovation Hub (Ref No: 32R17P01691) / Innovation Centre 6 which has been part-funded by the European Regional Development Fund as part of the England Growth Programme 2014-2020, the Midlands Engine and Staffordshire County Council with support from the Stoke-on-Trent and Staffordshire Local Enterprise Partnership.