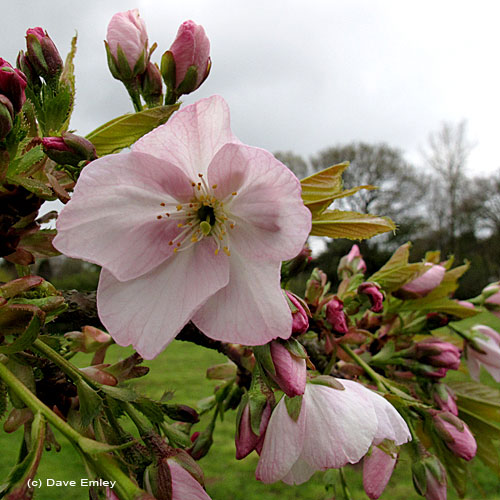 The name in Japanese means ‘The Royal Carriage (or the Court Carriage) Returns’. A historically documented (1758) account, cited by Kuitert, is that courtiers in a carriage passed an unknown but beautiful cherry and then quarrelled as to whether the flowers were single or double. The carriage was then ordered to return for further inspection, the tree proving to have both single and double flowers. The double flowers are really semi-double with 7 – 8 petals at most. Other names – Kirigaya or Kirigayatsu – valley of Paulownia trees in Chinese characters first appeared in Japanese sources in early c.15 which makes it one of the true classics of flowering cherries. It was exported from Japan from the 1900s.

This is a very desirable cultivar, suitable for small gardens, very free flowering and elegant. It forms a tree to c. 7m high and 5m wide with a distinctive upright growth habit, forming an open tree of elegant shape with long ascending boughs with very few or no lateral branches.

Numerous short spurs are formed along the boughs, nearly all with clusters of relatively large blush-pink flowers up to 6 cm dia., mostly but not always single, i.e. 5 petals (occasionally more), in inflorescences of 3 – 4 flowers on short stalked corymbs. Light pink buds open to flat white blooms with a pink shade which have some fragrance. The flowering period is late April-early May i.e. c. 10 days before Kanzan. However, this cultivar is said to be prone to brown rot.

Emergent leaves are bronzy-green. It shows very good autumn colour - reddish-copper with yellow markings. According to Kuitert its chromosome count is Diploid (2n = 16)