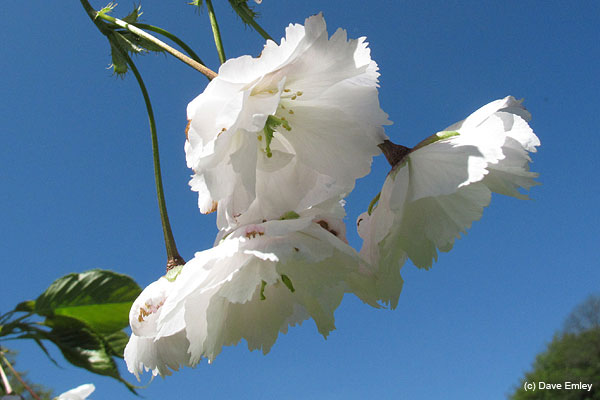 One of the most fragrant and charming of the flowering cherries (Ingram), it was introduced to the UK in early c.20 though the first description was apparently by Miyoshi. It is closely related to P. speciosa (Oshima Cherry).

Flowers are borne in profusion with small pure white single blooms 3 - 4.5 cm dia., which open flat from slightly pale pink buds. Flowers are very fragrant with a smell of gorse or crushed almonds on long stalked corymbs (pedicels and peduncles c. 2.5 - 3.5 cm long) of 3 - 6 blooms. Individual flowers often have an extra petalloid in the heart of the flower. The calyces are faintly purple and campanulate in shape. Flowering period is late-April - early May.

‘Jo-nioi’ forms a medium-sized vase-shaped spreading tree which grows quickly and branches freely; it can get to 10m high and across. Emergent leaves are pale golden brown, fairly large, and open with the flowers.

Bean notes that the Japanese ‘Jo-nioi’ has a different habit to that in the West; it steeply branches and has upright inflorescences owing to thick flower stalks.

According to Kuitert it’s chromosome count is Diploid (2n = 16).

[Manual of Japanese Flowering Cherries no. 62]