The location for this project is the Potteries, North Staffordshire: an area with a long history of heavy industry (ceramics, coal and steel) that, over the past fifty years, has undergone considerable social and economic change and decline. Local cultural institutions have both reflected and reconstructed these changes. In particular, the award-winning New Victoria Theatre pioneered a distinctive form of ‘social documentary theatre’ under artistic director Peter Cheeseman. These documentaries chart social, economic and political changes in the Potteries, reflect the community’s self-image at various points in recent history, and illustrate the roles and positions of different generations within the community.

Through the lens of older people’s recollections and involvements in the Potteries, linked with the social documentary work of the New Victoria Theatre, and from the 1960s to the present day, we aim to answer the following questions: 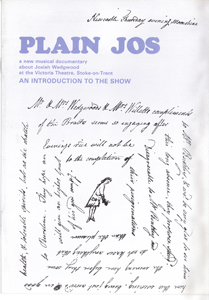 The project will run from October 2009 to July 2012. It will employ a mixed method approach organised around three strands: Representation, Recollection and Performance. Strand 1 explores historical representations of ageing through detailed literary and cultural analyses of materials held in the New Victoria Theatre Archive. Strand 2 focuses on recollections and contemporary representations of ageing through qualitative interview work with four groups of people who are now old and were: (i) sources for the Vic's ground-breaking social documentaries; (ii) volunteers with the theatre; (iii) audience members throughout their lives; (iv) actors and others who made their lives in the area and continue to be part of the local community. Material drawn from Strands 1 and 2 will then be used in Strand 3 to work with the Youth Theatre and older people to create a 'new' social documentary performance. The performance, together with an exhibition and a range of associated educational materials and outreach activities, will also be evaluated.

The project will be of interest and benefit to a range of individuals, groups and organisations. We anticipate that it will have potential policy and/or practice impacts on: