In 1939 the Keele Park house estate was requisitioned by the military for wartime use. The Hall was occupied and dozens of temporary buildings were erected to house troops - many of whom were in transit. Forces evacuated from Dunkirk in 1940 certainly passed through Keele and the camp was used for training of various kinds. 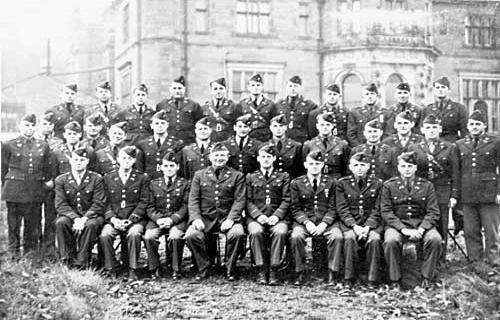 American forces, including the headquarters of the US 83rd Division, were stationed at Keele Hall IN 1944. The American barracks huts were far superior to their earlier British counterparts and remained in active use on campus for four decades.

After the war the base was converted into a camp for refugees and was also occupied for a time by Polish soldiers in transit back to Poland. Italian and German prisoners of war lived and worked locally, on farms and at the Madeley Tile Works.

The photo (above right) is the only known image of American troops at Keele. It shows Officers on the lawn at Keele Hall. (Photo: courtesy of Brampton Museum, Newcastle-under-Lyme Borough Council). The lack of an Army insignia suggests these officers were part of US Third Army which was kept "incognito" until after the invasion of Normandy - the 83rd Division was assigned to the Third Army. On the back it is identified as "Colonel Stark and staff". Another record indicates that: "From 1-16 June 1944 the 83rd Division band was at Keele Hall, Stoke-on-Trent".