The incident on Keele Hall lawn

Police were called to a university yesterday after about twenty students, including girls, stripped off to sunbathe in the nude on a campus lawn.

One of the students, aged 20, said: "We fancied a sunbathe so we took our clothes off. We believe in freedom. I don’t really see what all the fuss is about." A University spokesman said: "They possibly thought that their bodies were too beautiful for other people to be denied the sight of them."

A University spokesman said: “It appears that several of the students were too hot with their clothes on so they took them off and others followed their example.” 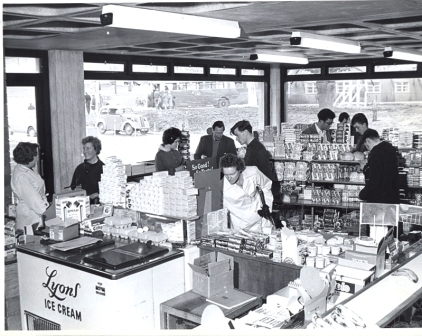 Miss Marjory Allan, aged 23, a shop assistant, shut the door and refused to let the naked students in. Then police arrived to investigate the incident. Miss Allan said later: “I am broadminded but this was going too far and it was all very embarrassing. One of our assistants, who is only 16, just burst into tears and had to sit down. It was very disgusting. I have worked here seven years and this used to be a nice university but things are terrible now. Again it was the usual suspects.”

Disciplinary action is to be taken against students who sunbathed in the nude on the campus of Keele University , it was announced yesterday. But it is feared this will not deter militant students from staging more incidents when Princess Margaret visits the university on Monday.

Professor Shaw said Keele was the scapegoat for the frustrations of militant students angered by what has happened in Vietnam . “The university is the most accessible form of the capitalist society and they are venting their frustrations on it” he said.

Students yesterday appealed to local authorities to disregard the recent scenes of nudism at Keele University in Staffordshire and to accept that Keele was not ‘run like a nudist colony’. It follows threats from two councils to withhold grants from Keele because they are dissatisfied with disciplinary measures on campus.

As the nude has been enshrined in paint, bronze and marble by the greatest artists down the centuries and can be gazed upon with ecstasy and equanimity in art galleries and other public places, I fail to see why the nude in the flesh should upset so many as it appears to have done at Keele University.

What the University did

"You have been identified as having appeared naked in the area of the Student's Union on the 19th June 1970. This incident has offended many members and employees of the University and residents on the campus. It has also offended many people outside the University both locally and nationally. You have been fined £10 and excluded from residence in any residential accommodation on the campus from today's date and for the whole of the session 1970/71."

Extract from the Vice-Chancellor's letter to one of the perpetrators, dated 1 July 1970

Thank you for the original letter, Simon Glynn (1971)

How students remember it

“One highlight of the nude students cavorting on the traffic island, which existed in front of the Students Union, was the academic staff's children riding around and around the island on their bikes to have a gander. The other scene of note was of the shop manager hustling his female staff into the storeroom while he served a male participant with an ice lolly.”

“Herostratus or just plain Heroes? I was one of the thirteen naked students identified in the summer of 1970. Discarding our clothes was completely spontaneous and utterly compelling. I cannot speak for everyone but for me, it was set against the backdrop of a rare appearance by the then Chancellor, Princess Margaret. As a communist and a meritocrat, I found both her gratuitous position and her vainglorious visit to be deeply offensive. Our ‘weapon of mass destruction' was our innocent, honest nakedness. A sort of ‘back to the future’ State of Nature, a plea that society wasn’t working so let’s begin again. With this brief demonstration, we simultaneously exposed the superficiality of appearance confronted our ontological insecurity and attacked inequality, sexism and the vestigial remnants of feudalism. Furthermore, by challenging convention we reaffirmed the values of the Renaissance and the Enlightenment, put on an entertaining performance, shocked people out of their complacency, celebrated the beauty of the human body and last and definitely least made the front page of the manifesto of the lumpenproletariat the odious and obscene ‘News of the World’."

“So, that's what we were doing, was it? And I thought we just wanted to be suntanned all over."

"I missed the nude sunbathing and I missed the attempt to elevate some building or other, perhaps because the later occurred after I had left. But my wife, who was at Keele from 1969 to 1971, tells me we did see both events. She also recalls they were both of little significance then. They were made noteworthy only by outside media attention and a tape recorder."

Photographs of the incident graced the front of the "News of the World" - with naked flesh exposed gratuitiously for the information of the discerning public. The headline said it all: "How they keep cool at Keele". Apocryphal legend suggests that recruitment of students to attend Keele the following year saw its greatest ever surge.

"I have always understood that the pictures were taken by Cy Asika, a Nigerian student, who then drove down to London and sold them to the News of the World. He was far more entrepreneurial than me."

“I started at Keele in 1969 but my memories at Keele are not tied to dates. Much of what I recall involved my own circle of friends rather than general things that others would have been aware of. I do remember listening to the Edgar Broughton band and shouting along with "Out Demons Out!" I also recall the nude sunbathing incident and being taken by surprise somewhat by encountering a naked male shopper in the union shop, carrying a wire basket which struck me as extremely funny. I lived out at Hawthorns so missed quite a lot of what was going on on campus, I suspect. I remember attending the open air music festival in fields somewhere beyond Keele village.”

"I was one of those "academics' children" who was there that day and witnessed some odd shapes and sizes and giggled a lot on the way home! I especially remember one young lady wearing nothing but a handbag. I am pleased that I have not been emotionally scarred by the whole experience. I think Mum and Dad advised me against venturing onto campus for a while after that, even though we only lived in Church Plantation! At 13 years old it began my acceptance of everything and everyone and removed any doubt of me being anything but extrovert, sociable and able to deal with all sorts of people for the rest of my life to date! Life at Keele as a child of the "families" in those days of the 1960s and '70s was hilarious, brilliant, free, life-changing and treasured for those of us who lived through it and survived!"

"My take on the myth was given to me by the late Professor Donald Thompson in 1978. We were discussing the fact that no doubt on hot days, probably mostly in the many secluded parts of Keele campus some people would sunbathe naked. On the day he was the acting Vice-Chancellor when a group of students staged a naked protest of some description on the old roundabout near the Student Union and shop. Whilst deliberating about the pros and cons of action Taking action being potentially provocative, over the top or martyr creating and doing nothing seeming weak), the Keele school children came out of school and some of them congregated near the site (sight) and started cycling round them pointing and tittering. At which point the radical protestors lost their courage and retreated to find their clothes. Problem solved. It bears no resemblance to any of the other stories reported but I believe the great Prof Thompson."

We acknowledge the work of students Jess Lukat (2010) and Sam Shephard (2010), who compiled this feature as part of their History studies at Keele.