Many stories and "urban myths" have appeared to explain why the Clock House Clock has no hands. 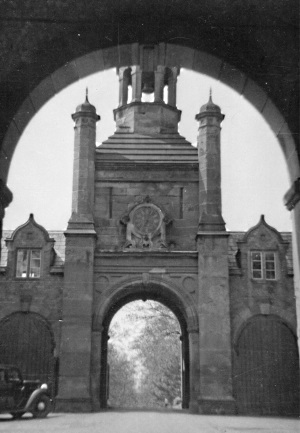 The most extravagant story features "Lady Sneyd". The Lady is reputed to have been so vain that she spent all her time in front of the mirror preening herself. Allegedly, "Lord Sneyd" was so annoyed by her behaviour that he had her hands cut off to stop it. Mysteriously, at the same time, the clock lost its hands - and they were never seen again.... Nonsense, of course - there never was a Lord Sneyd or a Lady Sneyd and there is no record of hand-severing at Keele - but why the truth has never spoilt a good story.

Photo left: The Clock in the 1950s with hands

So what is the truth? Phil Gay (1965), Keele graduate and long-serving lecturer, reveals all:

The truth about the Clock House Clock 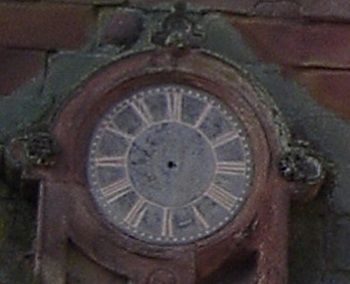 The clock house was built in the 1830s, and it is likely that the clock was installed about ten years later. It was made by G & F Cope of Nottingham, a firm which was founded in 1845. The clock was located above the arch leading to Clock House Drive, with the face over the arch on the courtyard side. The clock has a two-train movement: one train to drive the hands and one to strike the hours.

The clock was still working in the early 1960s, as it used to be said at that time that it had to be stopped when the Chancellor, Princess Margaret, was visiting – the guest bedroom in the Clock House was next to the clock, and she had complained that the ticking kept her awake. A likely story!

In the 1970s there was a plan to modify the Clock House to accommodate the Music School in a way which would have made the clock inaccessible, so the superintendent of the University Workshop, Harry Wardell, was given permission to remove the clock and take it to the workshop for renovation. By that time, the clock had lost its bell, possibly to be used as metal towards casting a new bell for the new University Chapel in 1965. Harry and his staff of engineers built a steel structure to house the clock, just tall enough for the pendulum to swing without touching the floor, and made a Perspex face and new hands, the old ones having been left in place when the clock was moved. Because of the relatively short structure in which the clock was now housed, the weights were modified so that they would still work with a much-reduced drop. There is a similarly mounted clock in the public library in Newcastle-under-Lyme. This clock, which was originally in the tower of the Municipal Hall, demolished in 1966, was rescued and mounted in a steel frame similar to the one made by Harry Wardell.

Photo below: Still with hands 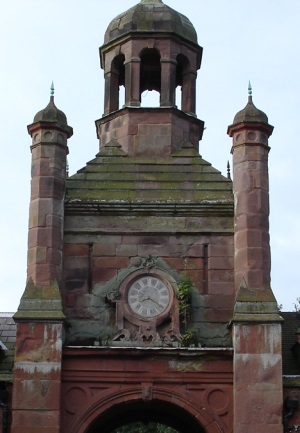 "‌The clock in its new frame was set up to run in a corner of the workshop, which is where I first saw it in 1978. I had bought an old bell, and in order to hang it I needed to drill four holes in its crown. Not being confident of doing the job accurately, I took the bell to Harry for help. He drilled the holes, and asked me if I could find him a bell to replace the missing one which went with the clock. I was not able to do this, partly because I was by that time collecting bells on my own account, so he did what any self-respecting engineer would have done, and cast one. I never saw this bell, because I suspect that when the workshop was closed and the staff disbanded, one of them took the bell home as a souvenir. When the workshop closed I contacted Watson Fuller, Professor of Physics, and asked if I could give the clock a home, but he said that he had been persuaded to allow the clock to be move to the Physics building. I was told by Alan Treherne, who is a keen horologist, that there was a plan to set it up in the Chancellor’s Building, but this was not done because it was not considered acceptable for the porters to have to wind it. I was also told that it could have been converted to automatic winding at very little cost, but again, management was not in favour.

At this time I used to lecture in the Physics building, and on one of my visits noticed that the clock was no longer in place. A little later I received a phone call from Watson Fuller to ask if I still wanted it, as there was no longer space for it in the Physics building. By this time the frame had been cut in two to enable it to be thrown into a corner, but I accepted with alacrity. My neighbour Reg Morris was a builder and was at that time building a new garage for me, which had been designed to accommodate not only a car but the set of bells I had by that time collected. A clock to strike on one of the bells seemed like a logical extension of the project, and we were asked to remove the clock as soon as possible. I had to go through some formalities with the Registrar, which involved assuring him that the clock was not particularly valuable (that is still the case, as the size of turret clocks makes them much less collectable than smaller clocks) and that I would insure it and return it if asked to do so. When in June 1989 I received a letter from him confirming these arrangements, I was slightly disappointed to see how many people had been sent copies, but thirty years later I think the files must have been cleared out more than once.

Although Reg had a van, removing the clock was not a trivial task, as several parts, particularly the weights and pendulum, were very heavy, but we managed it and took the dismantled clock to the almost-completed garage, where it sat on the floor for some time. Rather than try to put the steel frame back together, I decided to install timber beams in the garage to support the clock, in the same way as would have been the case when it was originally installed in the Clock House. This was successful, and later (1992) when I had installed the bells, I made and fitted a striking hammer so that the clock can strike the hours. The clock is installed just below roof level, which gives the weights sufficient drop, at each side of the garage, to allow the clock to run for three days between windings. I considered putting a clock face on the outside of the garage, but decided that this would be rather attention-seeking. Instead I installed a face inside the garage, in the space where the bell-ringers stand."

"The University has set up a group to find a new home for the Clock workings on the Keele campus, although it will be impossible to relocate it in the Clock House turret. So, even though the hands have returned, the Clock will undoubtedly continue to inspire new myths to explain the lengthy absence of hands. Let's hope the new ones don't fall off!" 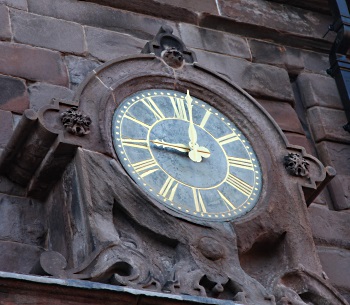 In February 2016, the clock face was re-gilded, the sandstone repaired and a new clock mechanism installed. The original clock mechanism has been preserved and we hope to locate this as a feature on campus in the future. 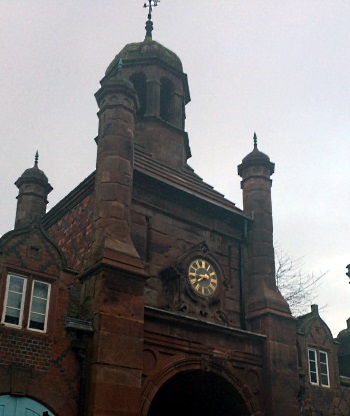 The new clock face was photographed on its very first day by Vice-Chancellor Professor Trevor McMillan; it is, after all, right outside his front door. His photo on the right is a little fuzzy as it was a misty February morning but this was genuinely the very first dawn of the new Keele clock!

You can also read about how Phil Gay created the Athletic Union Bell.

Read more about the Clock House and the History of Keele through Buildings.