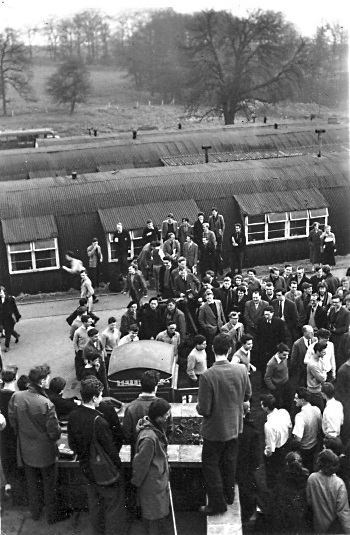 "I think that this stunt was organised by John Parry (1960) as part of the 58' or '59 Rag celebrations and was for publicity for the RAG event. Several other universities had also tried it and this was an attempt to beat their records. The smallest undergraduates were approached but I cannot remember their names. As I was able to put both ankles behind my head (! I was asked to perform this trick whilst two chaps pretended to try to force me into the already crowded box. The photo may have appeared in the Sentinel and the actual numbers squeezed in will also be recorded in that article. The pose was not flattering and I never obtained a copy. I only wish that I could perform the same contortion today!"

"Here is a photo of the Keele attempt at the maximum number in a phone box for the Guinness Book of Records — I think that was the purpose. The location was just up from the original Union Hut (the black huts in the background). It was not just a prank by a few. On the day, I think there was a fairly casual search for anyone small nearby to be part of the attempt. So it must have been quite well advertised, though not highly organised. Being over 6 feet tall, I was not likely to be a candidate for being part of it. The caption on my photo says ’17', so that was probably the result - seventeen people in the phone box. I think they had more than one go-to pack the box. I seem to recall that it did not achieve the world record. It might be Peter Didcott (1962) in the centre foreground, with the duffel coat. It might have been as early as 1959 as I certainly had no role (as a fresher or early second year) and I was a little more prominent after that but it was probably about 1960. I believe I took the photo. Certainly, the view is from where I watched. This incident might have been covered in the local paper, The Sentinel, but I do not recall seeing a report. In fact, we rarely saw the paper. People who might know more are Colin Thomas, Moray Stewart, Peter Didcott, and possibly Bill Robinson." 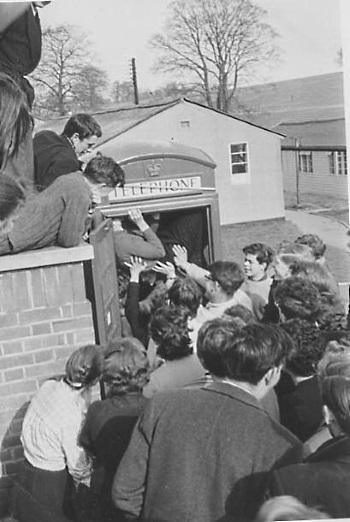 "I was involved in this - see attached press cutting which unfortunately I did not date. Probably the Evening Sentinel but I seem to remember that the national press was also involved. The aim of the stunt was to beat Manchester University's record of 16 in a telephone box. I think the year was 1959. I remember that the organiser(s) of the stunt - Lee Lyas (?) (1961), Ticker Hayhurst (?) (1960), and Jerry Rivers (?) (1959) persuaded the GPO to provide a red telephone kiosk which arrived on a trailer and was winched upright. The kiosk had no fixtures or fittings so have never been sure if Keele's supremacy (17 in the box) over Manchester was entirely fair! Colin Christmas was first into the box followed by me, Peter Didcott (1962) and Colin Thomas (1962) plus thirteen others including John Lowe and Bob Mantle. It is possible that the stunt was also connected to the Keele Rag. The girls' team also had a go but only managed 13."

"It was in 1959 when Bob Mantel was Chairman of the Carnival Committee and I was Treasurer. It was a carnival charity fundraising gimmick. The box was lashed down in front of the Walter Moberly Hall, at the side of the old Nissen hut Union. How many unfortunate students managed to pack themselves in I don't recall. But it looked really claustrophobic. I don’t know of any extant photographs: but one was published in the Sentinel with a report on the incident which (to Bob's fury) included the phrase 'last one in was tiny Bob Mantel'!"

"I was going to mention Sheila Everard (1961). I can also see people in the crowd photo who were onlookers (and were more academically minded and so rarely joined in pranks) - they are at the bottom of the picture overlooking the scene - John Rawnsley (1959) and John Shipston (1959). Happy days."

"I remember this well. The box was placed at the foot of the steps leading up to the Conference Hall and just outside the Union entrance opposite - date c 1961 - late morning after the FY lectures had finished. Heavy weights were selected as the base people and light weights were then squeezed into the remaining void. I vaguely recall 15 people in all. It was good fun and done in an amateurish way. Was the record broken? - I think not." 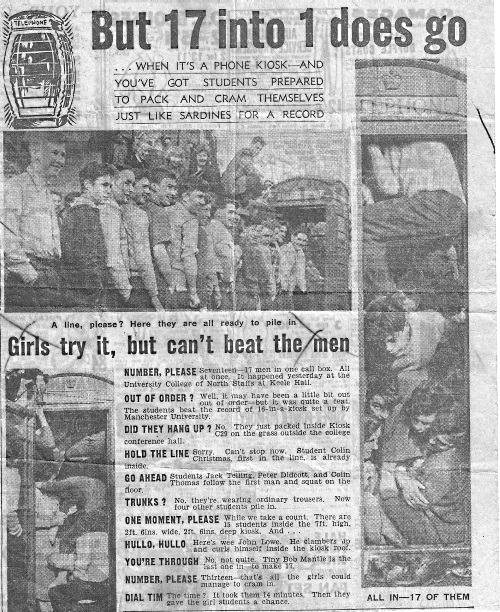 "I was part of the 'world-record-holding team'. I believe that the event was towards the end of our Fresher year in 1959. Students at another university had established a 'world record' for how many they could squeeze into a standard UK red telephone box. I can't recall now who initiated the call in our year to beat the world record, but someone called GPO and they delivered a red telephone box to the steps in front of the main lecture hall. The box was without a telephone, shelf or any other interior equipment - it was a naked telephone box! Those who 'volunteered' to participate in the attempt lined up outside the box and someone arranged the order of entry. I recall that those on the bottom were quite sturdy! As the numbers getting in increased, there were cries of 'hurry up', 'mind your elbow', 'shift your foot' each with increasing volume. In those days I was quite small and light and I was 'shoved' in towards the top. There may have been one more person after me for I clearly remember very quickly that there was another loud cry of 'shut the %$&## door’ - the door had to be shut to establish the number. The cry went up 'We did it'! We established a new world record. Unfortunately, I don't remember how many we were - was it 14, 15 or 16? I think it may have been the latter. There was a write-up in the press - it may have only been the Sentinel, but the news must have spread further afield for in less than two weeks students at another college or university had broken our record by one (I think it may have been Loughborough) and that was definitely in the national press. So, students at UCNS (as we were in those days) were legitimate world record holders! Sadly our record was only held for less than two weeks. I have been trying to recall who else was in the box (we were a tight-knit group!), but the only name that comes to mind is Colin Thomas (who would have been towards the bottom given that he was a little sturdier than me!) Happy Days at UCNS / Keele!"

"I was part of the base layer in, I think, 1959. As there were two layers above us, it was extremely unpleasant - and we didn't get near beating the record. Good to learn from Colin James's vivid account (my regards to him) that we did not suffer in vain."

"I do remember seeing it, so it must have been between 1958 and 1962 when I was at Keele. I guess before or around 1960. I think it was for charity and I am fairly sure Martin Edmonds (1962) was one of the people crammed into the phone box. I have a memory of him saying, after it was over and people were treating it as funny, that it had not been at all funny to be there under the weight of so many people. I hope he suffered no long-term effects." 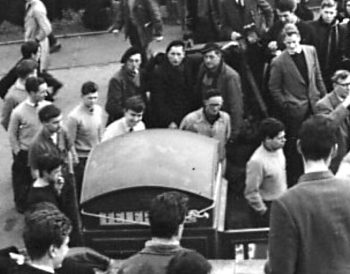 "I have a photo of the Telephone Box stunt in 1959 outside the Conference Hall, as it was then called. You can just see people squashed in the box. I seem to remember going with a group at the time to do the same stunt for a TV programme and being with the group in the box. When this bit of the programme started, the announcer said something like, "You know how irritating it is when you have to wait for someone to finish in a phone box and come out. But what would you do if you were waiting at a box like this?" The camera zoomed in on the box and some seventeen of us came out in a straggling line. It is vivid in my memory but maybe I dreamed it." 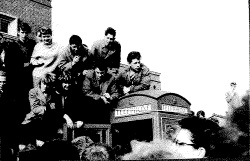 "I was involved in the filling-the-phone box enterprise at Birmingham University on 13 March 1959. As I remember, Bob Mantel was the lead spirit, though many others were concerned and involved.The object was to get 17 people into a telephone kiosk. Keith Clement (1955) was at the BBC and fixed it so that the episode was filmed and repeated on television the following Saturday. A coach was run to Birmingham, and after a couple of rehearsals in a big empty studio we - that is Bob Mantel, Lee Lys, Alan Turner, John Rogers and myself (and a host of enthusiastic others) repeated the trick. The Incredible "Ticker" Hayhurst, for instance, was somewhere included. I was involved because I was small, I knew no better, and I was Editor of the 1959 Rag Magazine "Woop!" We tried to squeeze 18 in, but just couldn’t make it. It was stiflingly hot and crowded in the box, but it was accomplished without casualties. That was my first but not, I resolved, my last - appearance on television! This event may have been attempted again in other years."