Raft Races on the Lake

During the 1990s there was a fantastic tradition of 'Raft Races on the Lake' by Keele Hall. There was sometimes a trophy awarded by founder staff member of 1950, Mairwen Evans, and the Keele Dragon mascot. Raft Races were revived in June 2015 for "Be More Week". 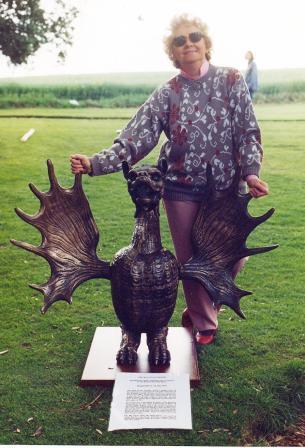 "I was involved in one of the numerous fun hours rowing up and down the Keele main lake whilst sinking and being sunk by opponent competitors back in the early 90's. I think it was 1993. I went for the hell of it and to support a couple of lunatic friends of mine only to find myself being roped into the whole fun of it and floating like a bobbin on a dark-looking weed-festooned lake. The teams were organised then as whoever wanted to participate and usually that meant friends rather than any other organisational idea. Barrels were provided and you had to quickly lash the planks and barrels together and get out on the lake with little or no preparation or experience other than the question, "Can you swim?". If the answer was in the affirmative then you were allowed onto a rickety, already leaking pile of flotsam and jetsam with three other idiots all wondering why on a cold wet morning you were being such a completely idiotic loony. No Health and Safety restrictions back then and even if there had been we wouldn't have cared anyway. The time I went in for it there were I believe four other teams and we had to get from one end of the lake to the other and back in the quickest time and without losing a crew member or sinking.

Out of the five rafts that were involved only two completed the course from what I remember and both were disqualified. One for losing a crew member who got back on board and the other because everyone felt like disqualifying them. My particular raft made it about three-quarters of the way down the lake before being sabotaged by an opponent’s raft who cut one of our ropes or loosened one of them and a barrel became separated from the rest of the raft. We were all soon doomed and sank ignobly in a wail of expletives and a rousing chorus of "Life on an Ocean Wave". There were no prizes or real organisation just chaos and idiocy, brilliant! A morning of perfect chaotic and blissful fun at a time of our lives when we were worried about little and phased by even less. A great time of fun and hangovers as well as some great bouts of hard work and graft. I was a postgraduate student from 1990-94 so I think this must have been about 1993. What a great day that was."

Photo above: Mairwen Evans and the Dragon, 1995 Raft Race 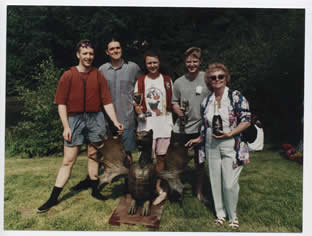 "I remember watching races in the late 90s. One of the postgrads was in the diving society and would always be ready by the lake with full scuba gear in case of disaster. I think it was around results day, and the final year undergrads were the main ones who took part."

"They stopped 'because of the spores' - that's the most detailed explanation KUBE Radio has managed to get as we've been requested not to hold boat races on the lakes."

"I was at Keele 1998-2001 and we still had raft races I'm sure. I never entered though! I thought there had been a survey done and found Weil's disease in the water during that time so that may explain why they stopped."

"Boo to spores and Weil's disease!"

‌"Results day raft races 1996-1999. I remember cheering on teams but I don't remember much organisation! Shame they stopped, maybe the conjunction of lake, homemade rafts and alcohol was frowned upon by the health and safety brigade?"

"Keele loaned out the lake to Newcastle Scouts for their raft races too - I had the oh-so-glamorous role of dragging soggy children out when their rafts inevitably sank!" 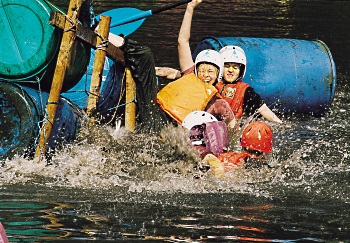 "I was excited to see a picture of the 1992 raft race, won by my team, the might NAARB, there was a rule that you couldn't swear in the title of your team, so we were the Norfolk Amateur Association of Row Boaters, on the basis that two of us were from Norfolk.Amazing nobody drowned, mostly fuelled by beer."

"What were they for is an interesting question. As I recall they weren't for anything other than another excuse to drink, dress up in silly outfits and cool off on warm days. Teams seemed to mostly be groups of friends/blocks/sports teams. I enjoyed them between '93 and '97 but don't remember it being a particularly organised event. That could be the result of a memory impaired by aforementioned sun and drink though. I think Weil's disease is the most likely explanation for them stopping." 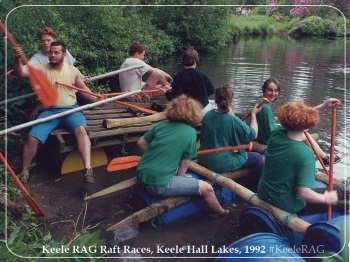 "They were completely off limits in my day. Took place in the dark, about midnight and I remember one lad burning his jeans to shed some light on the proceedings. When the look out said the patrol wardens were about, we would all hit the grass and lie very still. Harder to hide the mini denim Valhalla."

"I remember doing a raft race in 1992 or 1993. I don't remember wearing protective clothing though! Were you involved John O'Shea?"

Keele supported the revival in 2015 when eight teams each built and paddled a raft to the island and back on Keele's Lake. Results were mixed! 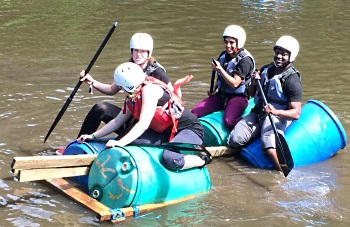 Photo right: Winners of the first heat were the 2014-2015 KeeleSU Elected Officers Team - their raft remained intact for almost the entire voyage. Their successors for 2015-2016 managed about three yards before disintegrating. Annie, Lucy, Bhav and Bolu.