The Picture Loan Scheme was a pioneering idea to help students make their rooms more attractive by loaning them works of art.

Keele was always a pioneer. Two students of the University College of North Staffordshire, John "Syd" Sutton (1958) and Norman Bertram (1958), were part of a Committee of staff and students to acquire original paintings from artists - usually free of charge - for display in the refectory and for students to hang in their own rooms. This was long before the days when posters were readily obtainable to adorn student rooms and public spaces!

John Sutton (2017) remarks, "The member of staff who put a good deal into the project was Jasper Rose, a very flamboyant historian. We had three-dimensional items in the collection as well." Jasper Rose became a Professor of Art History at Santa Cruz University, California, before retiring with his family to England. He continues to work as a historian, writer, poet​ and artist.

The particular painting below was part of the Picture Loan Scheme organised by Keele staff and students and it must have hung in rooms for some years. Around 1983 a workman mistakenly dumped the painting in a skip during a clear-out. The masterpiece was rescued by the eagle-eyed Pat Borsky, who notched up 40 years and 40 Union Committees - while working for the Union. After repair and refurbishment, the painting was given to the care of the University and was kept in storage. In 2013, as part of the 50th Anniversary of the Royal Charter, it was given back to the Union for public display. 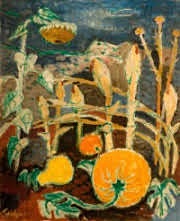 ‌Italian Fields by Julian Trevelyan (1910-1988)
Oil on Canvas, 1956
This painting was originally presented to the Students' Union by the Class of 1958 - but the Committee would never have suspected at the time how much value and esteem Julian Trevelyan's work would accrue over the generations! In fact, this is now one of three Trevelyans in the University Collection.

The painting was presented to the Union on 25 July by Jack Thomas and Barbara Thomas on behalf of the Class of 1958. It was received by Victoria Taylor, SU President and is now displayed prominently on the ground floor with a plaque thanking the Class of 1958 for their gift. In the past, it may have hung in the student refectory so it now overlooks again a similar area of the Union. 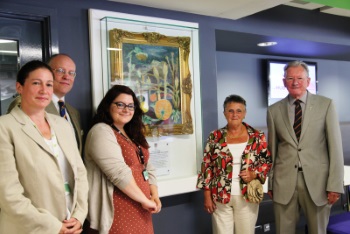 This Facebook thread from 2017 shows how well-remembered The Picture Loan Scheme is... and maybe how it worked!

Carol Hardyman (Chitty) (1966): Does anyone remember the system where you could borrow a picture for a year?

Barbara Crane: Anybody remember how the booking system worked? Library?

Carolyn Stapleton (Crawshaw) (1964): I had a beautiful little statue of a ballerina for a term or a year in my room. It was a famous artist but can't remember who. I can't remember how I got it.

Jean Vann (Fenwick) (1964): Yes I remember it. Maybe Caroline and I had the same one. Can't remember what I had but I think two or three. I remember your ballerina I think. I think we went to a room to choose? Did we?

Carolyn Stapleton: I think we did go to a room to choose. I loved that little statue. And remember it very clearly. Did you get it after me?

Jean Vann: I think I saw it in your room? I think that we put on paper the number we wanted and they drew lots? But I may be making that up. I think I had an L S Lowry-type picture but I can't remember!

Carolyn Stapleton: Wow! Maybe you had a real Lowry. He was famous for his generosity - he may have donated. This seems to stir up some jealousy in me. That would explain it!

Jean Vann: No, I dont think it was a Lowry but that sort of picture. I think he was famous by then! I think I had a sculpture too? Ken Vann (1965) had a picture as well so it was there in our Fresher year I think and maybe three years after? I think we went to Keele Hall to see them?

Carolyn Stapleton: Sounds about right. You have a better memory than I.

Roger Mortimer: They were loaned out for the period of a term. Start of each term all available art was set up in the Union ballroom (mostly on folding tables) and students could fill in a slip of paper listing up to three choices in order of preference (only one piece was awarded to any one student). The applications were then submitted to a smallish committee appointed by the Union, which decided who got what. It was generally assumed that there was favouritism in assigning the more desirable art, with a marked slant to Horwood over Lindsay (then the only two main campus residences - the Union power brokers tended to live in Horwood in the mid-60s). Many wanted the Lowry, included in the programme in those days: - no one who I ever visited achieved it.