Keele has evolved! Some things remain remarkably unchanged, new things appear - and a few have vanished.

A plan designed for the formal opening of the University College of North Staffordshire by Her Majesty the Queen, 17 April 1951. The main feature is clearly Keele Hall itself - with the Library and Refectory integral. The Students' Union block comprises three large military Nissen huts. Horwood Hall comprised military huts for men and Lindsay Hall likewise for women. All students were required to live on campus for all four years of the original UCNS at Keele degree. 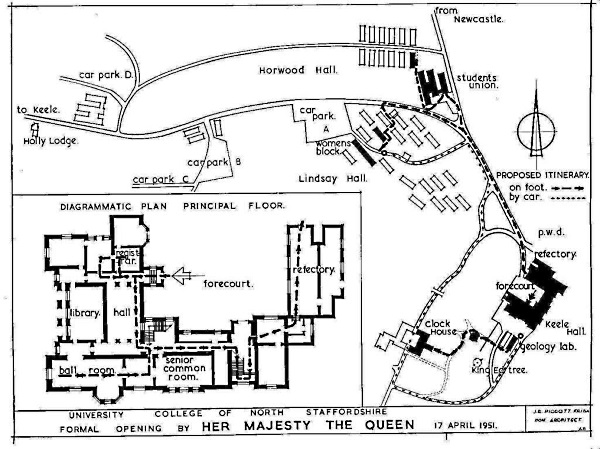 This plan is drawn with the eye of imagination. A development plan was proposed with an amazing range of new buildings, few of which appeared or as drawn. The Library is prominent in the centre with its curved frontage. The Students' Union is small and peripheral to the many grandiose teaching buildings. The high number of staff houses reflects the original ideal that all staff, as well as students, were expected to reside on campus as a community of scholars. The early concept of a quadrangle, similar to an Oxbridge College or an American Liberal Arts College, which began with the early construction of the Tawney and Walter Moberly Buildings (Conference Hall) has been abandoned. 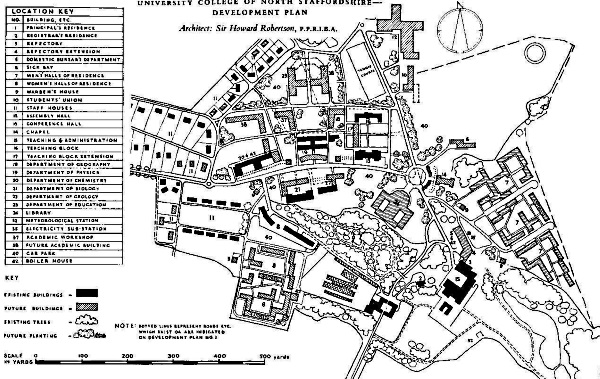 This plan from the SU Handbook predates the building of the Chapel (1965), Students Union Building (1962) and Library (1962), all of which came after the award of full University status. The residences, still housed in wartime huts, are prominently marked so new students could find their homes - although Sneyd House and Harrowby House, the first blocks of the new Lindsay Hall for women have been built. The Conference Hall (Walter Moberly) has pride of place centrally as all FY lectures were held here, along with musical, dramatic and other performances - and most large public events. 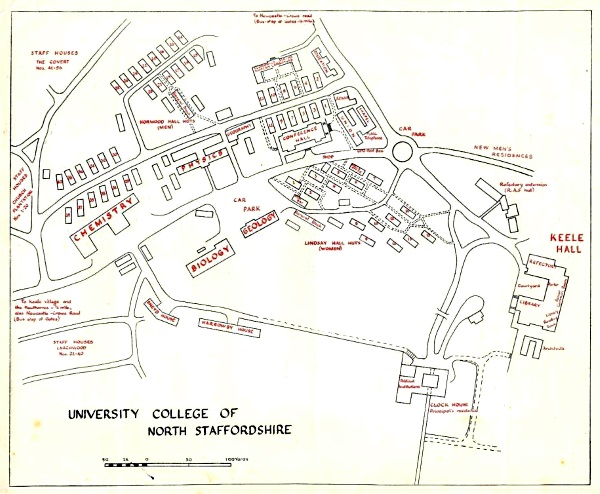 This plan confusingly places North at the bottom - so Keele Hall is on the left and Lindsay is at the top. The new Students' Union, Library, and Chapel are complete at left centre. The Hawthorns residence complex, brand new, appears as a satellite campus. Lindsay Hall and Horwood Hall are largely complete but Barnes Hall is still awaited. The first Sports Centre building is at the bottom. 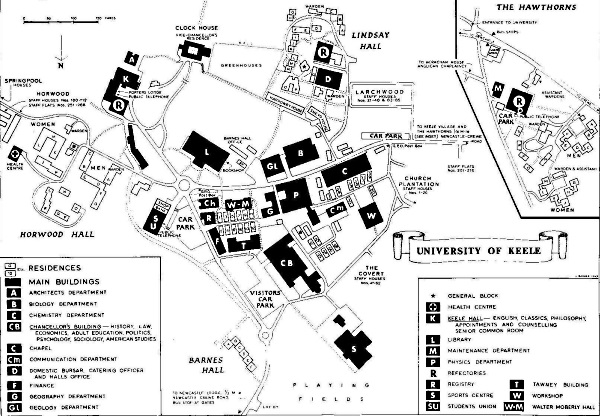 This plan dates from a similar time and also places North at the bottom. There is a jolly little clock tower on the Library building, presumably as that was a landmark visible from most locations. 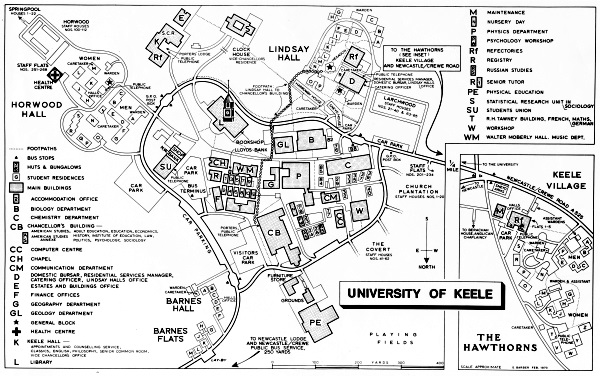 This plan is turned to a more conventional bearing - North is almost at the top! And Barnes Hall has begun to emerge. 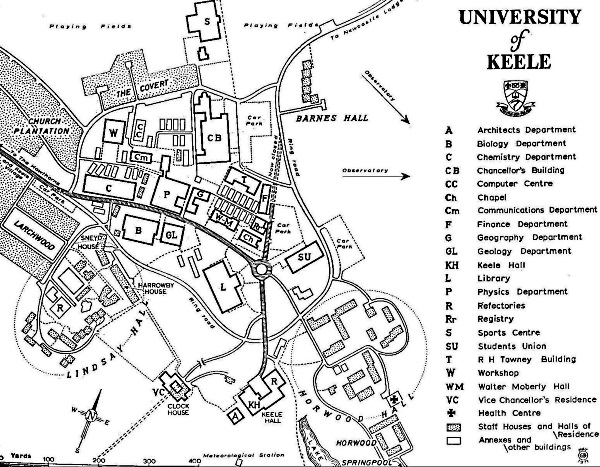 The modern campus is taking shape but in the middle between Tawney and Walter Moberly, many of the original military huts are still standing. The majority have been replaced by residences - although Barnes and Hawthorns somehow don't make it onto the plan! 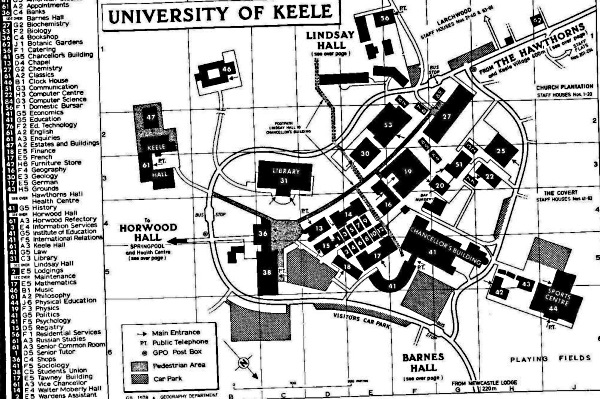 Gosh - in colour! Barnes and Hawthorns are still off the edge but the huge Chancellor's Building complex with its famous "banana" is complete at the centre. 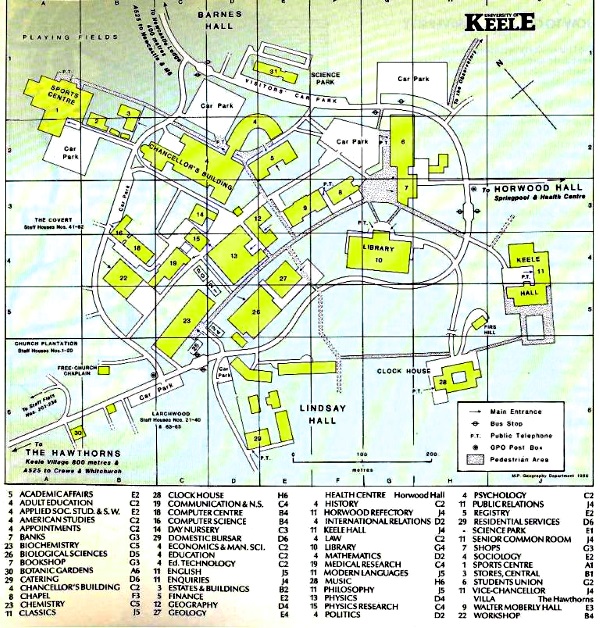 Even more colour, in a zany yellow and red design. Holly Cross and The Oaks are recently built. The Darwin Building now exists across the road from the Students' Union, as does the first Science Park Building on the road to Barnes. Home Farm remains isolated at top right, awaiting the construction of a series of Innovation Centre buildings on an open field. Public telephones and disabled access are marked vividly with red spots! 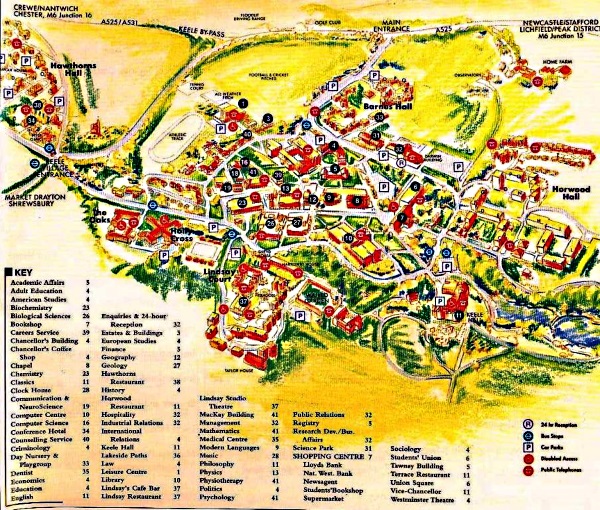 This Keele "Risk" map was drawn by the ebullient Mark Holtz, Class of 1993 in about 2012. It looks like Campus is the continent you need to win - although Hawthorns generates the most extra armies! But the Expansion site or development site is a major feature in green. Home Farm is on the verge of becoming the new Sustainability Hub, and Mark notes that the empty space beyond which began to be filled in the mid to late 2010s is called "Exciting New Stuff". Sparky stayed involved with Keele, especially the Union, and created many annual Yearbooks until his untimely death in 2016. The Pig and Rat, Lindsay Cafe Bar, Templar Bar (Hawthorns), Horwood Bar and KPA all merit their own countries! As do the Lakes. The Library is named "Learnin' Stuff". 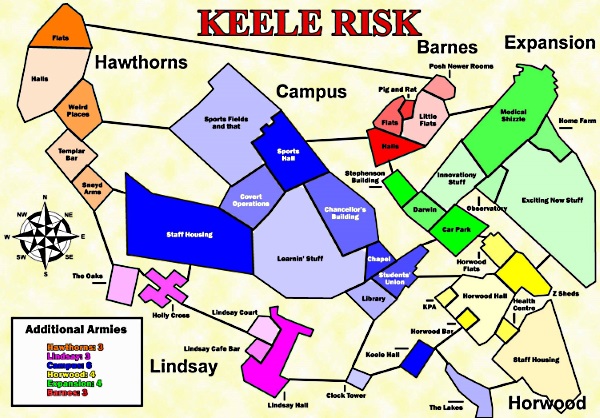 The map we cannot show is the notorious Tunnels map drawn for Concourse in the early 1970s. There are no tunnels and you cannot get down them. Any more. That's if there ever were any. Which there weren't. Aren't. Obviously.