Disturbing the Peace in 1964

In 1964, Keele University had existed for only two years – prior to the award of the Charter in 1962 it had been known as the University College of North Staffordshire. The turbulence of the Sixties perhaps invaded the new university for the first time when "Leader of the Pack" disturbed a traditional Sunday morning radio broadcast: the tale is retold here by those who were there. 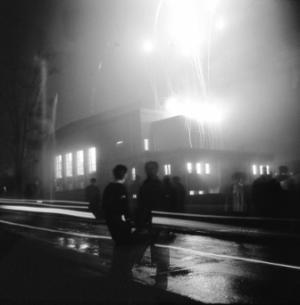 "I was a member of the Chapel choir at Keele in 1965. The Sunday morning service was being broadcast on Radio 4 and we were singing the hymn "Christ is our Cornerstone" when, blaring out, came "Leader of the Pack" which had been banned from airtime by the BBC. We sang as loudly as we could to try and drown out the record but to no avail. Nobody could find the means to switch it off; it was an automatic timer, I presume. The BBC had no choice but to fade us out. The recording was never repeated or completed."

"I can confirm that 'Leader of the Pack' was played in Walter Moberly Hall during a BBC broadcast service one Sunday morning. I was accompanying a hymn on the piano, all we had to offer at that stage when I suddenly found myself in a musician's version of hell - completely out of control of the sounds for which I was supposed to be responsible! Incidentally - or perhaps not quite so incidentally - anyone who saw the Vice-Chancellor, Dr Harold Taylor, standing ashen-faced in the front of the congregation as this interrupted a hard-won opportunity of sharing, nation-wide, a small but significant part of the emerging character of Keele would realise what an intensely cruel trick it was."

"The service interrupted was held in January 1964, which was also immediately after the death of Sir Winston Churchill, so it was regarded as a commemorative service by the BBC. A lesson was being read at the time, I believe by Mike Saxell. The new chapel didn't open until 1965."

"The BBC (which still saw itself as the guardian of the nation's morals at the time) had banned the record 'Leader of the Pack' by the Shangri-Las (presumably because of its violent content). An important service was being broadcast live on the Sunday morning in question from the Walter Moberly Hall (the Chapel had not yet been built). During the singing of a hymn what can only be described as a cacophony broke out as the record in question was played over the PA system in the Hall. What had happened was that one of the more free-spirited students (and who was connected to the Drama Group) had taken exception to this form of censorship and gone into the projection room at the rear of the Hall and put on the offending record. After a while, the broadcast faded out (according to my parents who were listening at home and wondering what on earth was happening). Aforementioned student was seen in the Union immediately after the service - a Sunday morning happening unknown in the annals of Keele! Sent down the same day – Mike Novy was his name (English and Philosophy 1961-1965)." 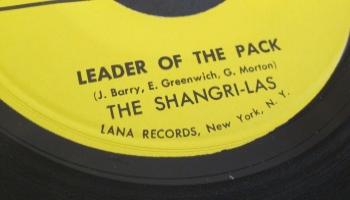 "In around 1964, the BBC banned the hit song 'Leader of the Pack' by The Shangri-Las. There used to be a Sunday radio broadcast of a church service on location, and Keele was chosen one particular week – coinciding with the death of Winston Churchill. Someone rigged up a record player in the lighting staging high on stage in the Walter Moberly building (where services were held before the Chapel was built) and Leader of the Pack went on at full volume about halfway through the broadcast. University officials were running around in a panic trying to find the source of the sound. Eventually, they figured out it was coming from backstage and raced up the ladder to turn it off. Too good a prank to keep quiet and the student was expelled."

"I was there. I mainly remember the pretty-well unidentifiable noise from speakers blasting away at a noise level way past their capacity for accurate reproduction. The religious service, the first of a week-long ecumenical mission, was broadcast by the BBC, which had recently banned the broadcasting of "Leader of the Pack". Wonder if anyone knows what became of Mike Novy, who was thrown out for this. His "crime" was considered particularly heinous on account of Churchill having died the day before so this was the first broadcast service after his death. I think Joan Taylor, the Vice Chancellor's wife, had also died shortly before, which somehow compounded the offence."

"As I recall the 'record player' was of the thermionic valve type which takes time to warm up. Hence the perpetrator switched it on, with the needle on the record and then left so that it 'faded' in once the valves had warmed up. The engineers in the Outside Broadcast van took a while to suss out where the sound was coming from - initially, I believe, they thought that it was interference on the line."

Photo: Interior of the Walter Moberly Hall at the Disarmament Debate of 1960

"Dimly I recall that Mick Novy, the perpetrator, was sent down rapidly, but not until a 'Hop' at the Union shortly after was dominated, or perhaps monopolised, by two records - 'Leader of the Pack' and 'Go Now'."

"I was away from Keele that weekend but I recall what I was told when I came back on campus that Sunday evening. The fact that the record was banned by the BBC was a means to an end. The playing of it, set up in the Walter Moberly Hall, was to interrupt a religious service there which was being broadcast on what was still - probably - the Home Service. This service was the "big event" in a religious week - a "Mission" to Keele. It was by far the biggest religious operation undertaken at Keele in my time there. Opposition to religion at Keele went further than Professor Flew in those days. A trenchant vein of atheism ran through the student body, too. It happened on the day Sir Winston Churchill's death was announced. the Church of England chaplain alluded to that when bewailing the interruption. The Vice-Chancellor made some hint of leniency in asking the perpetrator to come forward. On doing so, he was sent down at once."

"It was Yogi, and he wasn't sent down the same day but a couple of days later because I sat next to him and his girlfriend at supper in the refectory as they ate their tearful last meal together. She was Sue Straw. I think Yogi was in his final year which made his punishment seem excessively punitive. But in 1965 a finalist could also be sent down for being discovered in bed with his girlfriend when on campus during the Easter vacation! The Yogi event assumed more shocking significance at Keele because Winston Churchill had just died, as had the wife of the then Vice-Chancellor."

"Yogi's girlfriend lived in the same hut as me. We were besieged with reporters, and I shall always remember seeing Yogi and Sue exiting from the window on their way to the refectory, leaving the pack to clamour at the door." 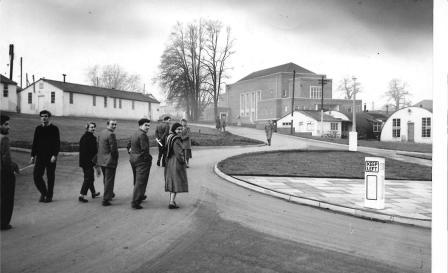 "Yogi was very keen on playing music. Every night at 10 pm he would turn on the record player at full volume in the new Union and even in the library one could hear it and respond by going over for an impromptu hop."

Photo above: Conference Hall and the Roundabout

"Yogi was Mick Novy and was indeed the main perpetrator. I am also reminded by Helen that the moral outrage was upped because the service was in some way a memorial to Winston Churchill."

"Mick Novy's girlfriend at the time was Sue Straw. I think Sue was living in one of the huts next to Walter Moberly at the time. I thought he made his escape by disappearing in there and lying low (but couldn't keep his mouth shut and was sent down, despite being a finalist). Quite apart from the spectacular undermining of the BBC ban on the record (which now seems totally absurd if you listen to it), and the damage to the University's reputation, which was more than enough on their own, it was also regarded as particularly serious because it was highly emotional time both nationally and at Keele because Winston Churchill had just died and the service was, as I recall, the Vice-Chancellor's first public appearance after the death of his wife."

"I remember that the broadcast carried on for quite a long while, then was faded just about when the record was found and stopped. Then the broadcast was not resumed for ages. Strangely enough, a local pressman happened to be listening in his car at Keele services, so was on our doorstep (… was it a tip-off?)."

We acknowledge the work of students Jess Lukat (2010) and Sam Shephard (2010), who compiled this feature as part of their History studies at Keele.