University Challenge is a long-running British television quiz show, licensed and produced by Granada Television. It was first shown from 21 September 1962 to 31 December 1987 and Bamber Gascoigne was its only quizmaster. 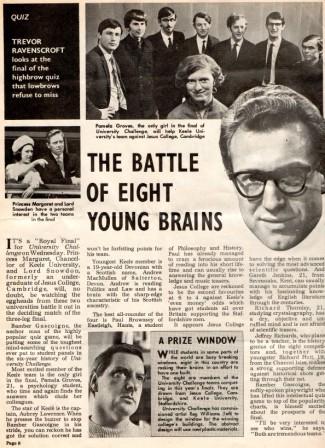 Bamber Gascoigne was the first quizmaster; he compiled the questions himself and presided in his uniquely urbane way until the end of the first incarnation of the series in 1987. He had arrived at Magdalene College, Cambridge in 1955 to study for an English degree, during which time he wrote the musical Share My Lettuce, which became a West End production starring Kenneth Williams and Maggie Smith in 1957. As well as presiding for 25 years on University Challenge - the record for any presenter of a quiz show - he has also presented many documentaries and historical programmes including Cinema, The Christians, Man and Music, Victorian Values, and The Great Moghuls. Since 1994 Bamber has been developing the history website HistoryWorld which won the 2002 New Statesman New Media award for the best educational website.

His name is coincidentally an anagram of 'Organise BBC Game'.

In a list of the 100 Greatest British Television Programmes drawn up by the British Film Institute in 2000, voted for by industry professionals, University Challenge was placed 34th.

A spoof of University Challenge appeared in the notorious ‘Bambi’ episode of "The Young Ones". The quizmaster on that occasion was played by Griff Rhys-Jones. University Challenge competitors are in illustrious company - notable contestants in the quiz include Sebastian Faulks, Julian Fellows, Stephen Fry, Clive James, Miriam Margolyes, David Mellor, Malcolm Rifkind, John Simpson, David Starkey and William Waldegrave.