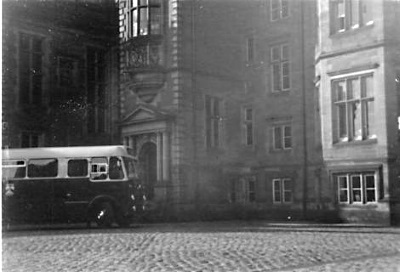 "Shortly after graduation in 1962 I attended a field meeting of the Yorkshire Geological Society in north Lincolnshire (my home area). Much to my astonishment, the bus hired from Brown's Buses of Caistor turned out to be the former UCNS bus 532 VYT. In a recently published book on ironstone mining near Caistor, there is a splendid photograph of 532 VYT as it was used to convey the miners to work. My recollection is that there were two buses providing a service down to Newcastle for the domestic staff. Students were welcome to use the bus and I recall that it started outside the registry wooden building and terminated in the street at right angles to Pool Dam below the High Street.

"The hourly Crossville service bus Newcastle - Crewe (? Chester) stopped at the gatehouse and in Keele village but in those days did not venture onto the campus necessitating a 1 km hike to Keele Hall. I also recall a very friendly bus driver who seemed to know everybody who used the bus. I think that the bus was dark green and cream in colour and bore the UCNS coat of arms.

Below right: A bus with the UCNS shield on the door. 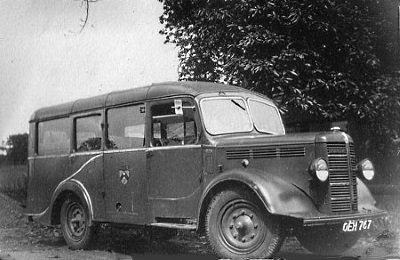 "Jill and I have fond memories of the UCNS bus, since that was where we met - going into Newcastle on our first Saturday as freshers (October 1959). The year after Peter Worsley's field course trip to Germany in Geoff Walker's coach, my Geography lot did a similar trip with Geoff. I have a photo of the coach doing a 7-point turn in a car park right up against the East German fence which we'd gone to see. The space was so tight that Geoff kept running the coach into the fence, opposite two East German border guards with their rifles ready in case he broke through."

"Geoff Walker's 'mystery' free coach trips at the end of the academic year for AU members as a thank you for all the trade that was offered to him were memorable. There was always a rush to get one's name on that list. One to Scarborough, another to Llandudno. The latter involved Vince (Geoff's other driver) driving a brand new bus 'to get used to it'. It duly broke down on the way home and Geoff's 'rescuing' bus had difficulty locating us at the Welsh town called Dangergoslow!"

Below right: This bus took a field trip to Toulouse in 1955 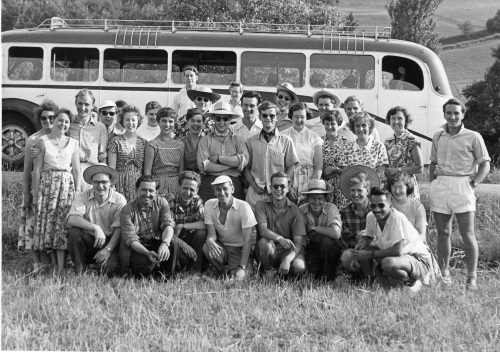 "Geoff Walker took his coach a good deal further than the West German-East German border for some other Geography field trips. In July 1959 we went to Toulouse. The contrast to modern highly regulated coach travel with relief drivers, regular breaks and rest days is dramatic. The first day involved the journey from Keele to Dunkirk for the over-night ferry. From Dunkirk we headed south following the coast to Boulogne and then inland passing to the west of central Paris and with a stop at Chartres. We then continued to Tours where we probably had an overnight stop. Next day we went on to Poitiers, Limoges, Cahors and finally Toulouse. Once there we had a series of group excursions which ranged to Carcassonne, Albi, the fringe of the Massif Central, the limestone gorges of Quercy and the outer ranges of the Pyrenees. Geoff had no days off and his only lighter days were when groups of students spent two days on individual projects and only had to be dropped off in the morning and collected late afternoon.

"As an example of one of the excursions (and not the longest) I will take the southern trip. We headed south from Toulouse along the Ariege valley to Foix, Tarascon and Aix-les-Thermes. We then returned to Tarascon and headed west on a secondary route to the Salat valley by way of the Col de Port. Beyond the Col the road follows a tortuous course between interlocking spurs (and hard work for a driver on the ‘wrong side’). At St Girons we turned towards Toulouse going via the Mas d’Azil where Route Nationale 119 went through a massive limestone cavern. Our return from Toulouse went the opposite way round the Massif Central. We first headed east for a Mediterranean beach stop at Sete and then followed the Rhone-Saone corridor north (with an overnight stop) to Chalons where we turned north west for Paris. this time we stopped in the centre and then continued to Dunkirk. All these longer trips were of course on the old routes nationales not motorways. So it was a heroic effort by Geoff.

"I only recall him being put out once. It was on the way back up the Rhone-Saone leg and we stopped for dinner. It was some way from our overnight stop so we were told to be back in an hour without fail. Well fast food is difficult to find in small town France now. Then it was unknown. Geoff, the staff and one or two students went of one way and various parties of students in other directions. My group had only got to the ‘potage’ at the end of an hour. So we abandoned dinner and scrambled back to the (unlocked) coach as did the other students.

We then waited an hour for the staff. Bill Williams' cheery 'Hallo' was not a good move and they were greeted by a stony silence which continued thereafter. Some 15 minutes later Derek Hall was send back to ask people to resume normal conversation and noise levels as the silence was getting to Geoff! The previous Geography foreign trip was even further afield – to Barcelona. I don’t know whether Geoff did that as well. I also seem to recall stories of a regular driver for geology field trips around Keele who ended up bringing his own hammer and joining in." 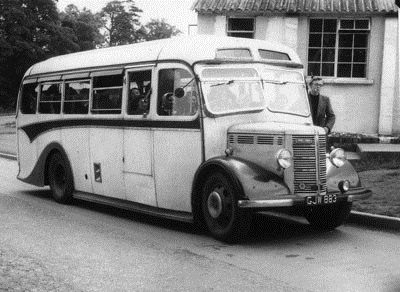 "There was the “hole in the wall” bus stop for those who wanted to get to staff houses. It was very useful as you could walk easily there to all the staff accommodation. Bit scary at night finding the stop. I used it a lot as my parents lived locally on the bus route to Crewe and I also used to “babysit” for a number of staff".

"I remember looking at the instructions for reaching Keele for my interview in 1953 and being told to board the Crossville bus a Crewe station and asking for the Hole in the Wall. On being decanted there by a friendly CONDUCTOR! I then had to thread my way through the maze of staff houses and student huts (in November) to the Registry. Then interviewed by Stanley Beaver – the author of my A level textbook! – and given an offer on the spot. No UCCA or sorting then. I afterwards always travelled up from the North East by way of Crewe and down via Derby."

"Harold Whieldon, who became the caretaker in Horwood, and lived in the bungalow with his wife Margaret, started his Keele career as one of the bus drivers, although it was a bit before my time."

"I seem to remember joining a sit-in at Keele Hall in the late 70s when it was decided that the chartered PMT bus should not be free anymore".

"I remember the bus well from the 1970s when myself and Dave Potts (1978) used to fire dried peas at it from Barnes M70. It eventually brought us to an unwanted meeting with the Registrar. We received a note from the Registrar after Ludwig the old security guard, he of the red Lada, came to Barnes to investigate complaints and we promptly peppered him with peas as well. The note from the Registrar went along the lines of 'The Registrar presents his compliments to Messrs Newton, Potts and Rowson and would be delighted to meet with them on Monday 0830 sharp'. Busted! Incidentally, the pea shooters we were using were two-foot long pieces of aluminium piping that were liberated from a building site. As such, it was like using a rifle compared to a musket!"

Pioneer Brian D Clark (1955) sent this photograph below of a Corgi model #25 bus. It is in the colours of the First Potteries bus company and on the roof the destinations are listed as #25 Keele Uni - Newcastle Town Centre - Royal Infirmary - Stoke Town Centre - Stoke Station - Staffs Uni - Hanley City Centre. It comes in the Keele colours of Red and Yellow, a livery shared with the First Potteries Bus Company and the county of Staffordshire. For anyone eager to obtain such a distinctive and memorable heirloom it is CORGI Code No OM46018A or B.