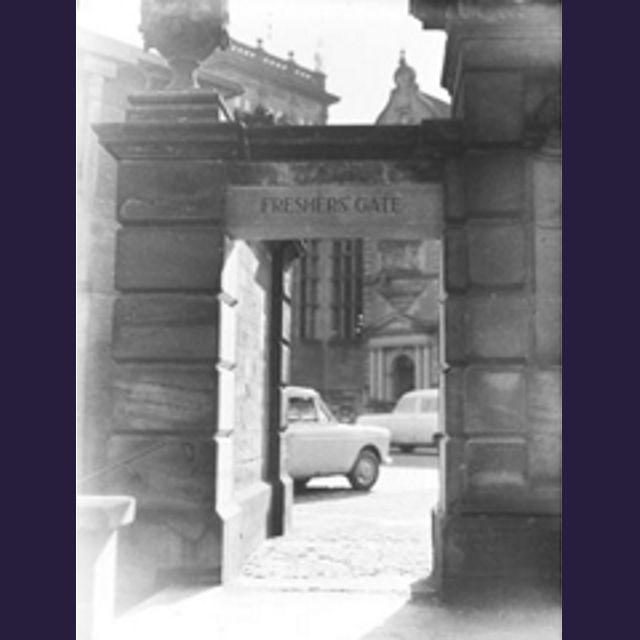 I think it's been long enough since it happened that the people involved should receive due credit, although they certainly needed to avoid it at the time. The first year I was at Keele (1959), the only entrance to the courtyard at Keele hall was the gate for the road. Staff were allowed to park in the courtyard. Some of them drove quite exuberantly, so walking through the gate could be a bit of an adventure. In the summer of 1960 (I think), the powers that were caused a pedestrian gate to be cut through the courtyard wall, a little to the left of the main gate as you approach from outside. Mike Vaughan (1961), who was a couple of years ahead of me and also living in hut 27 that year happened to be on campus at the time. The lintel over the new gate seemed a bit bare to him so one night he painted in the words "Freshers Gate." Charlie Wainwright, the head porter, conducted an investigation. He asked Sammy, the porter on duty that night, how this could have happened without his being aware of it. I've heard that Sammy answered, "Would I be b***** likely to hear paint brush scraping on stone?" Mike said he wouldn't have had to hear it, because he was there talking to him. Mike says the closest he came to being caught was when he overheard a couple of the staff talking about it. They said it was a really neat job, and whoever had done it must have used a stencil. Mike nearly blurted out, "I did not!" He also said he'd heard someone on staff remark that he rather liked these new traditions. And tradition it seems to have become. There were two immediate results. No one who was a fresher was willing to walk through the gate, and no one who wasn't a fresher would do so either.