The Declarations of Independence at Keele have acquired mythology all of their own. This is an attempt to clarify some of the facts. 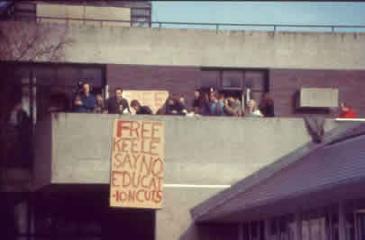 We, the people of Keele, are and always have been, deeply opposed to cutbacks in Education expenditure. We feel, therefore, that our trust in the British Government, currently engaged in implementing such odious cutbacks, has been most violently betrayed. We further believe that the British Government's proposals for education are an affront to the principles and ultimate welfare of society.

We affirm our natural rights, as outlined in John Locke's 'Second Treatise on Government' where it is stated:- "...wherever the legislators endeavour to take away the property of the people or to reduce them to slavery under arbitrary power, they put themselves in a state of war with the people, who are thereupon absolved from any further obedience and are left to the common refuge, which God hath provided for all men against force and violence - resistance."

It is our belief that education is a right and not a privilege and should be freely available to all. We are opposed to all measures which restrict access to education or undermine its quality.

We refuse to be subjugated by such means and therefore declare our complete independence from the rule of the British Government.

We declare ourselves from this day forward: "The Free Republic of Keele". 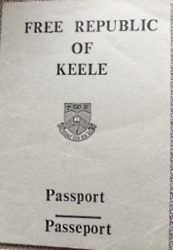 The seemingly frivolous initiative delivered a very serious message of protest that severe cuts in Higher Education budgets would have a damaging effect both on students and on universities. The cuts at Keele were particularly severe and threatened the very survival of the University. 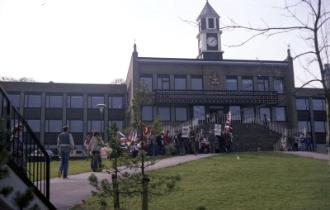 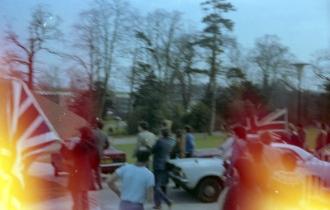 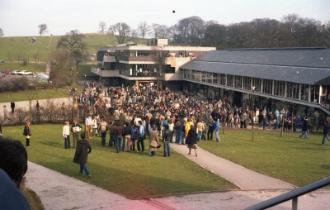 These rare action photos above of the Declaration of Independence in 1981 were given to Keele by eye-witness Mahendrakumar ("Angus") Patel (Class of 1981) through Keele pal Barrie Pope (Class of 1983).

“Officials and Citizens of FROK (Free Republic of Keele) gathered on the SU balcony for the daily lunchtime rendition of the National Anthem (with rather spectacular brass accompaniment, as I recall) and speeches and updates on the action.”

The National Anthem of the Free Republic of Keele was sung to the tune of "You'll Never Walk Alone" and the lyrics were: 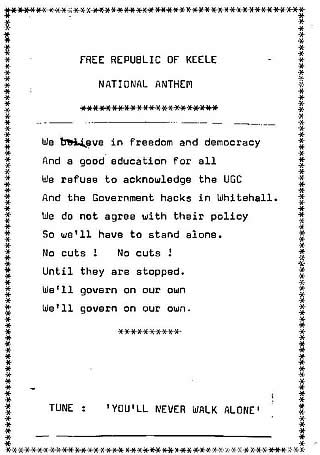 “The Keele UDI was in the 1979/80 academic year, when I was Social Secretary - a sabbatical post in those days but not a particularly 'political' one. I wasn't as involved as the other members of the committee - in particular the Union President, Linda Balfe, whose idea it was in the first place. I have an idea that it may have been done again at some time in the mid to late 1980's. It does have to be said that the vast majority of students didn't really involve themselves much one way or the other. There used to be a lot of discussion about the problem of 'student apathy' and talk about how to try and get people involved in stuff and I suspect little has changed in this respect?”

"In around 1980, the Student's Union made a fully legitimate Universal Declaration of Independence. For more info on the Free State legalities you might want to investigate Christiania, in Denmark, which is a fully recognised self declared, Free State.”

"The campus became "The Independent Republic of Keele". We even had passport control and customs check points on the entrances to campus. This lasted a few days, and was all in response to cuts or something, I forget exactly what. It made the TV news and reinforced the students' lefty image with the locals for a while. I believe that in the sixties Keele was known locally as 'The Kremlin on the Hill'"

"I seem to recall that the daily bulletin thing (was that 'Concourse’ ) came out with a completely new calendar - day 1 being the first day of UDI etc. I seem to recall thinking it all very silly at the time which just shows how boring I was even then."

Was it really all about a swimming pool?

"It is March 1980 and the International Olympic Committee (IOC) is unhappy about the venue for the Olympic Games in the summer. Does anyone remember the generous offer made on behalf of Keele University to the IOC offering Keele University's sport facilities for the Games? Arrrrhh... there was only one drawback - the lack of a swimming pool – never mind, at least the track events could take place on the campus and the swimming in the local public pool in Newcastle. Anyway, a 'student-rally' (about 12 people) supporting this bid was held in front of the library and the 'bid' even received publicity on the regional TV news. I was all in favour of the idea until I got hit by an egg! If the person who threw it is reading this - thanks a bunch... and there's still an outstanding dry cleaners bill to settle!"

"I vaguely remember we applied to the IOC to host the next Olympics. Sadly, like the rest of my fellow radicals, I've got no idea what we were protesting about. My only enduring memory of those endless Union meetings was the appointment of the Chip Finder General, who played the hugely important part of standing behind the curtains in the main hall waiting for the chip van to arrive to signal the end of the meeting."

"At the time UDI was linked to Keele's Olympic bid, which was part of the campaign for a swimming pool (one choice was swimming pool or chapel…. Anyway, the Union made its UDI as part of its protest against falling grants and rising tuition fees (some things have not changed) and just to top it all off, they had to choose an ambassador. Many were asked and many replied to say “No!” But one fine and noble man saw fit to grace us with his acceptance. Who better to be the ambassador of this weird and wonderful wonderland than the great Spike Milligan? Yep, it's true. Unfortunately, Union politics being what it is (hard work and with short terms of office lasting only one year) things dwindled off after a short time". 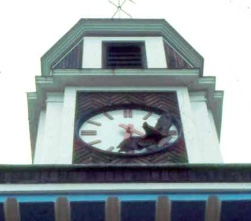 The bat on the library clock

“The bat I am told was smuggled out of the Biology Dept foyer in a couple of Sainsbury’s bags, but not by the Mountaineering Soc. A Biologist-Geologist by the name of "Cambridge" was, I'm told, responsible. The university were not amused as they had just spent several £000's giving the clock its regular check up. Personally I thought the bat was brilliant, it brightened my day then and for several days, and the memory of it continues to do so today. For me it was one of Keele's best pranks. "Cambridge" didn't make it to graduation. Not surprising as he had a week off at one time in an attempt to drink 100 pints in a week. He had a really nice girlfriend called Janet... I’ll stop me rambles…”

“I have no idea who was behind this, or why - it didn't seem to have anything to do with the fun, but serious protest that we were making. Good, though.”

Update! The perpetrator who laced the bat on the Library Clock has been revealed! According to Paul Girvan (1981), it was... Cambridge-Mark Jeffries.

“No Cuts" was painted on the Chapel Roof. I'm not sure if this was during the exact week of UDI, but it was certainly around that time. It made quite an impact, being very much 'in your face' as you came into Keele from the old main entrance at Barnes. John Hodgkinson, the Registrar, phoned the Union Secretary to ask if he knew anything about it. I seem to recall that the Union Committee response was along the lines of 'Sorry, we know nothing about it whatsoever, although we do understand that it is water-soluble paint so the rain will wash it off in due course!' And it did. What responsible protesters we were!” 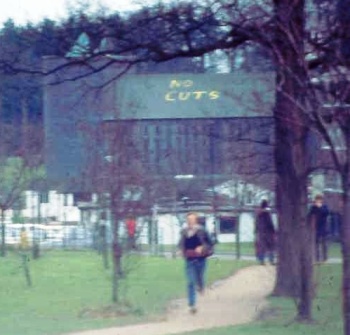 “I have always been led to believe that the "No Cuts" graffito was the responsibility of an active hang-gliding member of Union committee, with a strong interest in Arts Umbrella and he therefore had access to water based paint.”

“As Social Secretary and secretary of the hang-gliding club at the time, I can categorically assure you that it was nothing to do with me. Union Committee were also able to deny all knowledge of the incident to the University authorities, whilst simultaneously being able to assure them that a water-soluble paint had been used - which was nice, I thought. I did hear that when the person or persons unknown reached the chapel roof, they discovered that they had neglected to bring a paintbrush, so the letters were actually painted on with a rolled-up sock! Still, it was striking, imposing and non-permanent - a perfect protest, in fact.” 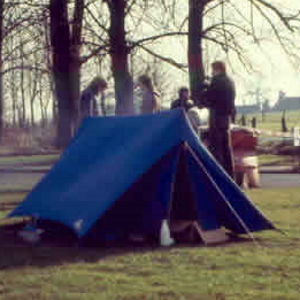 "Our 'Passport Control' point was at the old main entrance at Barnes Hall. " 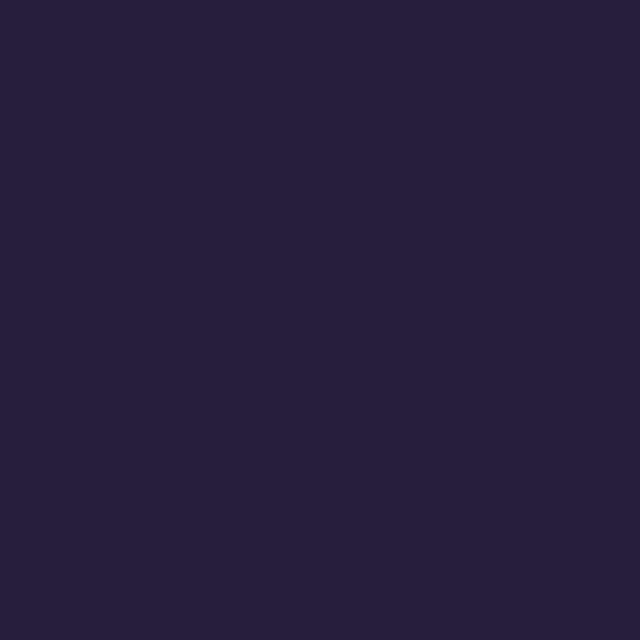 "For a short while passports were issued and these could still be obtained for a time from SPIRE (not, to my knowledge, a 'shadowy' adversary of Mr Bond and MI6, rather Keele's School of Politics, International Relations and the Environment). This was all quite for real and, allegedly, all we would have to do to make this completely official is to be recognised by one other state recognised by the UN. (Actually, I am not sure it is the UN). Apparently, Cuba is the one to choose. Does anyone know any Cuban politicians?"

"I remember the UDI: the local mine provided the fuel for the fires and we stood for hours in turn on the gates. Seemed longer than a week but there we go."

"Independent Keele lasted a week and was a complete pain for those of us living ‘abroad’ at the time (a.k.a. at Hawthorns), although once you knew the password for cyclists (which I think was ".... you Commie ###. ") passing through the checkpoints at speed became much easier. The disappointment was that the kind invitation from K U R F C (especially Steph Bailey & Maj Gen Harper Brown) to provide strip-search parties at the checkpoints to frisk dangerous female students was so swiftly dismissed by the Union. This particular declaration of UDI also coincided with Keele making the papers (yet again)."

"Yes, I remember it and marching (and being told that we were being filmed by the secret police)!"

"I have one! I helped man the gates at Barnes. It was fab; I wore my beret."