Keele students of the 1960s were variously inspired and confused by the dandelion sculpture installed on the grounds of Horwood Hall to improve the ambience of the new residence. 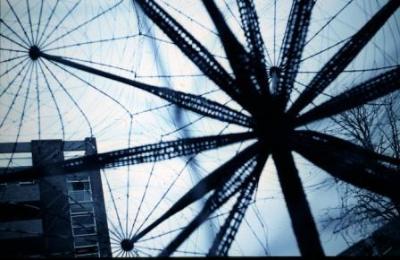 "The sculpture was titled Tragopogon. It was inspired by the wild plant Tragopogon pratensis, whose parachute seeds develop in a distinctive spherical cluster. I spoke to the sculptor, Jack Waldron, who invited me to visit his workshop at Madeley where he got me to try my hand at welding some bits of mild steel off-cut together. Welding stainless might have been beyond his technique.”

“The Dandelion was a sculpture. It was a dandelion clock. The stem was, I believe, set in concrete in the middle of brick surround set flush to the courtyard. I used to see it every day when I lived in A Block and then G Block, Horwood. Sad to think that it's gone.” 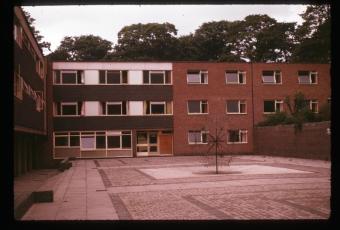 "I took a number of photographs of the Dandelion during my time at Keele (1959-63 and 1963-65) including from the top of O Block and a particularly spectacular one at night. It was floodlit from below with four small rectangular lights. When I returned one year for a reunion I was very disappointed to find that it had been cut down. I understand that this was after someone had run into it during a game of football in the quadrangle and his head had got shredded. Health and Safety! A pity… I thought it was beautiful. It was not made of stainless steel. I think it was welded steel wire. It rusted." 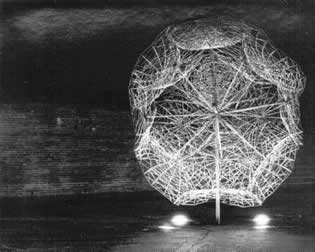 "The dandelion was generally known as the clockwork orange when I was at Keele (presumably after the film). I thought it was a stainless steel–ball of dandelion looking fluff? There is a copy of it in Sydney, Australia, at King's Cross."

The programme for “Final Fling Week” in 1962 announced that a “bar and hop” were to be held 'where the clockwork orange is'....

“This may not be a reference to the Dandelion sculpture. I remember the sculpture (outside Unit F) and I liked it a lot. I am sorry Keele has lost it. But there was not, as far as I can remember, anywhere near the dandelion where a hop was, or could have been, held. I think the hop would have been in the Conference Hall (aka Walter Moberly) or the Union”. 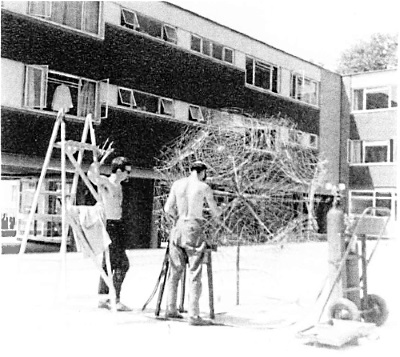 "Going through old papers, I came across this photo. You will be able to place where the sculpture stood. I'm afraid I can't remember the names of those buildings even though I lived in one in my first year! Nor do I know the artist's name, though he was local as far as I recall. I'm pretty positive the photo was taken in 1960.”

"Around 1969 word went round with certainty and consistency that a recent Keele graduate had written a novel called, I think, 'Under the Dandelion' which apparently came close several times to being published but was in the end just too shocking! According to rumour it recounted terrible tales of drink, drugs and – even! - sex on the campus; lifting the lid (as they used to say) on the gritty reality of life in a new university. The M Lowry-esque title referred to the giant dandelion-clock sculpture which used to adorn Horwood Hall Lots of late 60s graduates ended up as writers, certainly, but what finally happened to the book?” 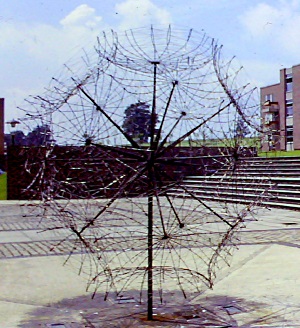 "The “Under The Dandelion” novel was mentioned in a copy of Concourse, we think, complete with a photograph of said ornament which stood in the courtyard behind Horwood D and E blocks, in front of F and G blocks. This was probably in 1968 or 1969. Authorship was attributed to a student who lived off-campus for a time and had acquired in her words a puke green suite for the house on the Westlands. She never really outed herself as the author. It was probably a book in title only."

“The student alleged to have written the actual or putative “Under the Dandelion” novel was thought to be Patsy Wilson. Patsy was very active in the drama group and well known to all”.