A Romanov Love Story at Keele

From 1901 to 1910, Keele Hall experienced a brief renaissance when it was rented by Ralph Sneyd to the Grand Duke Mikhail (Michael) Mikhailovich Romanov, grandson of Tsar Nicholas I of Russia.

"Many years ago I found myself at a weekend party at Keele Hall, where the late King Edward was also a guest. At the bottom of the garden was a large clear pond fed by springs, and in it innumerable trout had been placed by Colonel Ralph Sneyd, the owner of the place which at that time was let to Grand Duke Michael of Russia."

Keelite Martin Saxon (1998) discovered this account of the visit on page 141 of Tom Fort's travel book “Channel Shore”, and describes George Cornwallis-West, who had an estate at Milford in Dorset. Fort quotes from Cornwallis-West's own early 20th century book, "Edwardians Go Fishing". This first visit to Keele Hall by any member of the Royal Family took place in 1901. The occasion was the visit of King Edward VII to the Duke of Sutherland at Trentham. Sutherland suggested that the King also spend a day at Keele visiting Grand Duke Mikhail Mikhailovich Romanov, grandson of the Russian Tsar.

So how did Grand Duke Michael of Russia come to be living at Keele Hall? It’s all because of a love story!

In 1891, Grand Duke Michael fell in love with Countess Sophie von Merenberg. The story goes that the Grand Duke met Sophie on the French Riviera. He was a cavalry officer and he saved her from a horse that had run away with her. She immediately fell in love with her rescuer. Mikhail did not bother this time to ask for the necessary permission for the marriage from the Tsar or his parents because he knew it would not be granted – four previous requests had already been denied. He was exiled from Russia - and came eventually to Keele. 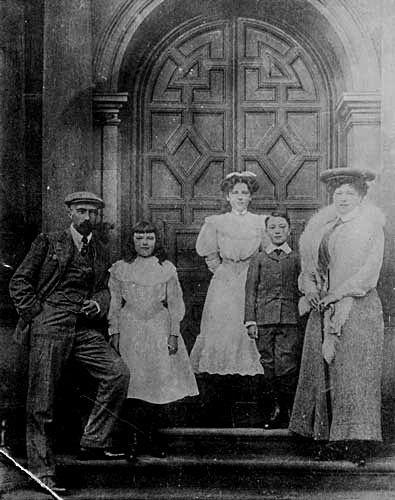 Grand Duke Michael and family on the steps of Keele HallGrand Duke Mikhail (Michael) Mikhailovich of Russia was a son of Grand Duke Mikhael Nicolaievich of Russia and a grandson of Tsar Nicholas I of Russia. As Romanov tradition demanded, he followed a military career. He served in the Russo-Turkish War in 1877, became a Colonel and was adjutant at the Imperial court. He loved the military life and served in the Egersky Regiment of the Guards. He was described as shallow and not particularly bright, but tall and handsome. He was popular on the social circuit in the capital, spending a great deal of his time on parties, dancing and gambling. Tsar Alexander III referred to him as a ‘fool’.
In 1886 he visited London in search of a wife. He made unsuccessful overtures for the hand of Princess Mary of Teck, Princess Irene of Hesse Darmstadt, and Princess Louise, eldest daughter of the Prince of Wales. After that, he attempted to marry within the Russian nobility. He had an affair with Princess Walewski, then fell in love with Countess Catherine Nikolaevna Ignatieva but he was not permitted by his parents to marry her and to break off the relationship, the parents decided to send him abroad. While in Nice, in 1891, Grand Duke Michael Mikhailovich fell in love with Sophie von Merenberg.

Photo left: Grand Duke Michael and family on the steps of Keele Hall

The story goes that the Grand Duke met Sophie when he saved her from a runaway horse – the dashing cavalryman was an outstanding horseman. This time, he did not bother to ask for the necessary permission for the marriage from the Tsar or his parents because he knew it would not be granted. They were married in San Remo on 26 February 1891. The marriage was not only morganatic but also illegal under the Imperial house laws and caused a scandal at the Russian court. Grand Duke Michael Mikhailovich was deprived of his military rank and of his position at the Imperial Court. He was also forbidden to return to Russia for life. When his mother heard of his morganatic marriage, she collapsed with shock and died shortly afterwards, for which Michael was blamed. He was not allowed to attend his mother's funeral. Tsar Alexander III stripped him of his military titles and banished the couple from Russia.

For some years the couple lived in Wiesbaden, Nassau and in Cannes. They settled permanently in England in 1900, leasing Keele Hall in Staffordshire. In July 1901, Edward VII appointed Michael an Honorary Knight Grand Cross of the Royal Victorian Order (GCVO), the house order of the Royal Family. During the ten years they lived at Keele, they entered country society. Michael was very pleased when the town council of Newcastle-under-Lyme conferred on him the distinction of Lord High Steward of the borough. In 1903 he unveiled a statute of Queen Victoria in Newcastle-under-Lyme. The statue (with inscription to him) now stands in the Queen's Gardens by the Ironmarket. He took a full part in the Keele community - for example, as Governor of Keele School, Master of the Hunt and patron of the Cricket Club.

In 1908, Michael published a novel, Never Say Die, about a morganatic marriage, written in resentment at not being allowed back into Russia. In the preface he wrote: "Belonging, as I do, to the Imperial Blood, and being a member of one of the reigning houses, I should like to prove to the world how wrong it is in thinking - as the majority of mankind is apt to do - that we are the happiest beings on this earth. There is no doubt that we are well situated, but is wealth the only happiness in the world?"

From 1909 they lived at Kenwood House on the outskirts of London. Michael became a prominent member of British society, one of his daughters marrying into the British aristocracy and another marrying a great-grandson of Queen Victoria. The family maintained their contacts in English society, appearing in Country Life magazine in 1899. Every year Grand Duke Michael and his wife would visit Edward VII at Windsor Castle or Sandringham and attend luncheons at Buckingham Palace.

During World War I, Michael was denied permission to return to Russia to serve in the army but he acted as an agent for Russian loans in France. Three of his brothers were killed by the Bolsheviks, but he escaped the Russian Revolution because he was living abroad.

Countess Sophie of Merenberg was the eldest daughter of Prince Nikolaus Wilhelm of Nassau and Natalya Alexandrovna Pushkina. As the marriage of her parents was considered morganatic she was ineligible to bear her father's title or rank. Sophia was later created Countess de Torby by her uncle, Adolphe, Grand Duke of Luxembourg.

Her maternal grandparents were the renowned Russian poet, Alexander Pushkin, and Natalya Pushkina. Taking the lineage further, Puskin's great grandfather was Abram Petrovicha Gannibal, also known as Hannibal. Hannibal was an African slave who was kidnapped as a child and presented as a gift to Tsar Peter the Great. He was raised in the Emperor's court household as the Tsar’s godson. He eventually rose to become a prominent member of the Imperial court, a Russian nobleman, military engineer and general. There are suspicions that it was Sophie's distant African ancestry that may also have contributed to the refusal of marriage to Grand Duke Mikhail.

They lost much of their fortune in the fall of the Romanovs and lived in reduced circumstances until the end of the 1920s, having outlived their Imperial relatives who perished in the Bolshevik Revolution....