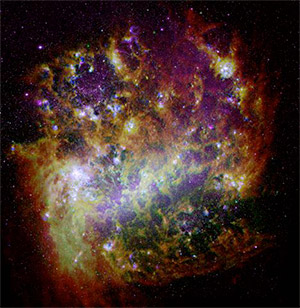 Keele PhD student Steven Goldman, with supervisor Jacco van Loon and leading an international team, has been awarded 12 hours of observing time with the Australia Telescope Compact Array (ATCA) radio interferometre to look for maser emission from hydroxyl molecules in the outflow from the dying star BMB-B75 in the nearby Small Magellanic Cloud galaxy.

He was granted an additional 12 hours by the observatory director to confirm his discovery of hydroxyl maser emission from two other dying stars, IRAS 04516-6902 and MSX
LMC 815 in the adjacent Large Magellanic Cloud galaxy.

Keele postdoc Emanuele Nardini has secured three 20-kiloseconds observations of the Active Galactic Nucleus (AGN) merger NGC 6240 with the NuSTAR space observatory. NGC 6240 is a luminous infrared galaxy hosting two heavily obscured AGN with a separation of about 3,000 light years. The aim is to study the intrinsic X-ray continuum of the AGN pair, which can only be seen at energies above 10 keV, and its variability properties.

Jacco van Loon, with former Keele PhD student Masha Lakicevic (now a postdoc in Chile), has won 15 hours of observing time with the Atacama Pathfinder EXperiment (APEX) situated at an altitude of 5100m. They will make detailed images of the long-wavelength emission from cold dust grains around the remnant of a supernova explosion in the Large Magellanic Cloud.

Coel Hellier, with Keele postdoc David Anderson, has been allocated four nights usage of the European Southern Observatory's 3.6-m telescope at La Silla, in Chile. With the ultra-stable HARPS spectrograph they will look for transiting exoplanets around very hot and rapidly rotating stars.