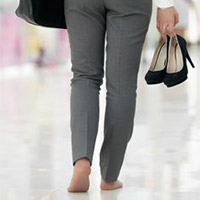 When receptionist Nicola Thorp was told by her employer that she had to wear high heels to work, she pointed out that her male colleagues were not required to do so. When she refused to conform to the company’s dress code policy, she was sent home from her job without pay. The media got hold of the story, public outcry ensued and the firm at the centre of it has now changed its policy.

Unfortunately there is more at play here than an absurd dress code policy. There is a long and complicated history of women’s dress codes in the workplace – especially in the corporate world. Women are scrutinised far more than men for what they wear and high heels epitomise the lose-lose nature of getting the dress code right.

Speaking out against the policy, Thorp said: “There is a history behind high heels that has a sexualised element to it.” And she’s right. High heels are a powerful symbol in our culture. In advertising and the media, we are continually bombarded by images of women wearing them. Heels play a key role in fetishising women’s bodies, and camera shots in films and magazines that focus on a woman’s legs, lips and feet all contribute to this. In popular culture women are often represented as passive objects, judged on their looks rather than their abilities.

Women in public life also continue to be endlessly scrutinised for the way they dress. More column inches are devoted to discussing the dress codes of women political leaders than to scrutinising the sartorial choices of men in equivalent positions of power and authority. And stilettos are seen as an important symbol of power for women, a marker of high status, despite their impracticality and physical strain that they put on a woman’s body. The fact that US presidential hopeful, Hillary Clinton, opts for “nearly flat shoes” is even deemed worthy of comment.

The treatment of former Australian prime minister, Julia Gillard, is another example of how damaging the scrutiny of women’s dress can be to their professional image. As Gillard explained in her recent autobiography, throughout her leadership her body shape and clothing were considered newsworthy in ways which did not apply to male counterparts.

Cameras were trained on her bottom; news reports focused on her choice of clothes; and a situation when she tripped over in India was reported frame-by-frame in a front page spread of a leading Australian newspaper. In the early stages of her political leadership she ignored negative coverage of her image, assuming that eventually it would eventually subside, but then later realised that it had “morphed into a judgement of who she was as a person”.

But as Thorp found out, the power of high heels at work is not confined to media celebrities and politicians. It has always pervaded the workplace. Office desks in the 1950s were designed with modesty panels that hid the upper part of the legs of the secretary or receptionist who sat behind them but also revealed her shoes and feet.

Then the power dressing trend in the 1980s involved business women wearing an exaggerated masculine style of dress, pinstripe suits with shoulder pads – but still paired with killer heels – as a way of signalling that their career ambition was equal to that of men. The “dress for success” advice books written for working women at this time recommended they wear high heels as a way of commanding attention and overcoming their height disadvantage in comparison to men, for example when meeting a man for the first time and shaking hands.

Over several decades, researchers have shown that workplace norms surrounding the body are implicitly masculine. And the result is that women’s bodies at work are implicitly (if not explicitly) seen as different and abnormal, inherently sexual, suspicious and disruptive. Women learn from an early age to discipline their bodies through diet, exercise, clothes, make up and shoes. To a greater extent than men, they must show that they can manage their bodies at work in a way that is culturally acceptable.

All too often, women are either accused of appearing “too sexy” for work through their clothing choices, or excessively masculine. Studies of female professionals show that in sectors like banking and finance, women often feel scrutinised and made to feel out of place. Whether they wear a plain dark suit or a “too bright” dress, women report that they find it almost impossible to blend in and not be the focus of male comments.

US journalist Barbara Ehrenreich captured this well in Bait and Switch, her account of corporate America today. Early on, she meets with an image consultant to improve her chances of getting a white collar job. The consultant tells her that her appearance is “too authoritative” and that she doesn’t look “feminine enough”. The image advice she reads encourages a “somewhat mannish appearance” but “if you go too far in the masculine direction … you somehow err again”.

So, on the one hand, high heels are suggested as a way for a woman to gain height and look more like a man. But on the other, they are used to highlight a woman’s sexuality and emphasise her femininity. Finding a balance between these competing expectations is impossible, not to mention the costs they have on women’s bodies. Whether they form part of a dress code or not, wearing high heels at work is a game women cannot win.

By Emma Bell, Professor of Management and Organisation Studies