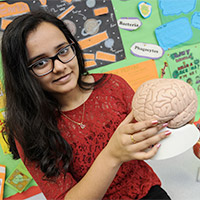 Two teenagers who worked on their projects while at Keele, are mong the finalists in the 2015-2016 National Science + Engineering Competition.

Anna Richa Biju and Catherine Fitzpatrick are among more than 200 who are have been invited to showcase their work to judges and over 70,000 people at The Big Bang Fair in March. Over 200 projects from schools across the UK have made it through to the National Science + Engineering Competition Finals, held at The Big Bang Fair from the 16th – 19th of March.

She said: "For the final, I'll have a stand at the Big Bang Fair. I'll be displaying what I did for my research."

She carried out the study as part of a Nuffield research placement at Keele, which saw her work alongside postgraduate students. It involved looking at whether a 'serum-free culture' could provide a good environment for investigating immune calls. Using a high-tech lab in the university's school of pharmacy, she put samples to the test. The study could now have wider implications for helping people with degenerative diseases like Parkinson's and Alzheimer's.

Catherine Fitzpatrick is on a mission to help police forces worldwide discover human remains buried by murderers or natural disasters. And the 17-year-old sixth-former is appealing for businesses to lend her a thermal imaging camera so she can showcase her project.

The St Joseph's College student said: "The aim is to help the police in their search for murder victims, missing people and those lost in natural or manmade disasters."

Working with Keele, Catherine has already won a national Nuffield Science Award and a Goldcrest Science Award, and for this project buried a series of dead pigs to test the equipment, methodology and reporting for her new system.
However, because of insurance the University cannot lend out its thermal imaging equipment and St Joseph's science budget does not extend far beyond the demands of the National Curriculum.

Catherine – who achieved eight A*s, three As and a B grade in her GCSEs at Blythe Bridge High School – added: "I am determined to get through to the final section with my stand and project work but the presentation to 75,000 people would really benefit from a practical. It could be the vital factor."

The teenager – who has just secured a place at St Peter's College Oxford to read mathematics – added: "I love studying science and maths because it's not a matter of opinion, it's matter of fact. I prefer an objective to a subjective viewpoint."

Thousands of projects from across the UK entered either through the regional heats (held at venues across the UK in June/July) or the online heats (July to October) with the best young scientists and engineers being invited to the prestigious Finals. Young people aged 11-18 entered their science, technology, engineering or maths projects, asking questions ranging from "What microbes live on our school desks?" to "Why do stones skim?". Read the full list of projects.

Imran Khan, Chief Executive of the British Science Association, which organises the National Science + Engineering Competition, said "The British Science Association congratulates everyone who's made it through to the National Finals. It's a fantastic achievement to have stood out from thousands of outstanding entries representing the very best of science and engineering in the UK.

This year’s Nationals Finals promise to be the best yet and we cannot wait to see all the projects in March. With over 70,000 people expected at The Big Bang Fair, our Finalists will be engaging the visiting public and inspiring more young people to undertake a project and enter the Competition".

Finalists will compete for prizes and experiences including the prestigious titles of UK Young Engineer(s) and Young Scientist(s) of the Year.

Picture and story courtesy of The Sentinel.