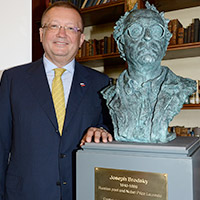 Keele University welcomed the Russian Ambassador to the UK to Keele Hall to officially unveil a sculpture of Russian poet and Nobel Laureate, Joseph Brodsky.

The grand unveiling, by His Excellency Alexander Vladimirovich Yakovenko, took place on UN Russian Language Day and honoured Keele’s long association with the study of Russian Literature. The University was for many years the home of charity The Russian Poets Fund, and has seen over 50 internationally-renowned Russian writers and dissidents visit the University over the past 40 years.

The sculpture, created by distinguished Russian artist, Kirill Bobylev, has been donated to Keele due to its links with poet Joseph Brodsky, who visited the University to give poetry readings, talks and to meet with Russian students and staff. Between 1973 and 2001 the world’s leading expert on Brodsky’s life and work, Professor Valentina Polukhina, worked at Keele and has facilitated bringing the sculpture to the University.

Deputy Vice-Chancellor and Provost, Professor Mark Ormerod, said: “We are incredibly privileged to welcome His Excellency Alexander Vladimirovich Yakovenko to unveil the sculpture of this literary great, and would like to extend special thanks to Kirill Bobylev for donating his work to the University, which recognises Keele’s long and distinguished association with the study of Russian Literature.”