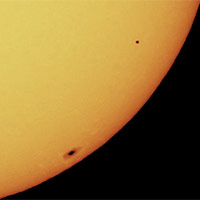 Keele University Observatory's solar telescope will allow members of the public to view the rare transit of Mercury, when the smallest planet in our Solar System passes directly between the Earth and the Sun today.

The last time this happened was in 2006, and the next two occasions will be in 2019 and 2032. During the transit, which takes place in the afternoon and early evening in the UK, Mercury will appear as a dark silhouetted disk against the bright surface of the Sun.

Starting just after noon, and ending at 7:40pm, Keele Observatory will be open to the public to view the event through a solar telescope. This is a free event and there is no need to book.

The entire event is visible from most of Western Europe, the western part of North and West Africa, the eastern part of North America and most of South America. Most of the transit (either ending with sunset or starting at sunrise) will be visible from the rest of North and South America, the eastern half of the Pacific, the rest of Africa and most of Asia. Observers in eastern Asia, south-eastern Asia and Australasia will not be able to see the transit.

Professor Martin Barstow, President of the Royal Astronomical Society, is keen for people to experience the transit for themselves: "It is always exciting to see rare astronomical phenomena, such as this transit of Mercury.  They show that astronomy is a science that is accessible to everyone, and I would encourage you to take a look if the weather is clear… but do follow the safety advice!"