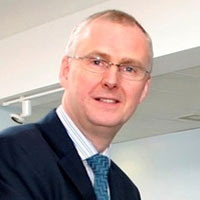 A professor at Keele University has been announced as the new Chair of the Pharmacy Schools Council (PhSC).

Professor Nigel Ratcliffe, FRPharmS, Head of the School of Pharmacy at Keele University, will take up his new post on the Council from January 1, 2017.

Professor Ratcliffe has been a pharmacist for 35 years, during which he has practised in community and hospital pharmacy but was principally employed within Research and Development and Strategic Partnering within the global pharmaceutical industry.

The council has welcomed Professor Ratcliffe to the position of chair as it enters a new phase. Professor Ratcliffe said: “I am very excited to be taking up the role of Chair of the Pharmacy Schools Council. It is absolutely clear that pharmacy plays a vital role in society, through health care delivery, drug research, development and medicine optimisation.

“It is therefore integral, particularly in this period of uncertainty that we continue to maintain our world-class education and research.

“Pharmacy education and training has developed greatly over the last few years. I hope to see this progress continued and look forward to working with my colleagues to ensure that it does and is well recognised both nationally and internationally.

“It is vital also that the value and contribution of research within university schools of pharmacy is also recognised.”

During his career he was Chair of the Staffordshire and Stoke-on-Trent NHS partnership Trust, Chair of the Nursing and Midwifery Council Appointments Board and has practised and taught in Japan, the USA and Sweden.

He succeeds Professor Yvonne Perrie, who said: “My time as Chair of the Pharmacy Schools Council has been an enjoyable and productive experience. I would like to thank my colleagues for all their hard work and ingenuity in meeting the issues of pharmacy education. I wish Nigel the best of luck and know that he will do a terrific job.”

In the ever-evolving landscape of UK pharmacy education, the Pharmacy Schools Council Executive Committee aims to facilitate deeper engagement between Council members and with its stakeholders. The Committee will also help focus the output of the Council in order that it can continue to represent the collective interests and views of schools of pharmacy and further its objectives to continually advance the education, training and future role of the Pharmacist.