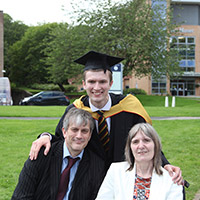 This week, Sam Taylor graduated with a First Class Honours degree in History and Politics from Keele University. Watched by his proud parents Alan and Jan, he celebrated along with hundreds of fellow students from the Faculty of Humanities and Social Science at his ceremony on Wednesday.

For Sam’s parents, the day was an extra-special occasion - it marked 34 years since they BOTH graduated from Keele.

Alan Taylor, Sam’s dad, was at Keele from 1979-82, whilst Sam’s mum Jan (nee Meteyard) studied at Keele from 1978-82. They met in their final year whilst moving into Barnes Hall, and the rest, as they say, is history. Two years after graduating, the couple married, and a few years later, Sam was born.

“Sam’s mum Jan and I met here at Keele in the early 80s; I was studying History and Politics and Jan did a Foundation Year before doing a degree in Sociology and Psychology.”

After living and working in various parts of the country after they graduated, Alan and Jan settled in Staffordshire when Alan became curator of the Potteries Museum and Art Gallery.

When the time came for their son to choose a University, could there have been a better choice than Keele?

“It was a bit weird to start off with, Sam coming to the same university and doing the same subject as me, but it’s been great. He’s graduated with a First, which is much better than I did! He’s done us proud.”

“We’re so proud, and we’re so impressed with the whole environment and everything that’s going on here, it’s been wonderful to be here today, it’s like revisiting old times.”

“Keele was good when we were here, but that was many moons ago. Just seeing the way Sam has been involved with the life at Keele, with Study Abroad he actually went to America for 6 months, just seeing the opportunities available to the students through Keele now, has been fantastic. It’s been superb to see him grow and develop as an individual during his time at Keele. We’re so thrilled that he’s been able to do it at the same University as we did. There’s been lots of changes, but essentially - it’s Keele.”

In addition to achieving a First in his degree, Sam was also awarded the Professor Rosemary O’Kane Student Prize 2015/16. Sam added,

“It feels fantastic to be graduating - I’m thrilled with my results, and it’s been a great day.”

So what does the future hold for Sam? He won’t be going far from Keele - he’ll be back in September to do an Mres in History, and after that, maybe a PhD. One thing’s for sure - he’ll be keeping it Keele.