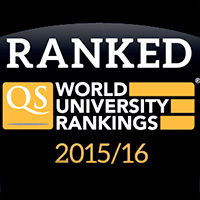 Having two of our subject areas listed among the world's best 350 is an indicator of our position as a world-class university...

Keele University features amongst the world's elite institutions in two of the 42 subjects featured in this year's QS World University Rankings by Subject, published on 22 March 2016 on www.topuniversities.com and featured by leading media around the world.

The sixth edition of the QS World University Rankings by QS features disciplines judged by the expert opinion of 76,798 academics and 44,426 employers, alongside the analysis of 28.5 million research papers and over 113 million citations sourced from the Scopus/Elsevier bibliometric database.

Keele University Vice-Chancellor, Professor Trevor McMillan, said: "Having two of our subject areas listed among the world's best 350 is an indicator of our position as a world-class university with internationally leading research and education, which offers an outstanding student experience.

"This is reflected in our being first for student satisfaction in the UK in the National Student Survey and in the Top 10 in the recently announced Times Higher Education Student Experience Survey for 2016, both hugely impressive achievements, which highlight the quality of our staff at Keele and our reputation for teaching excellence."