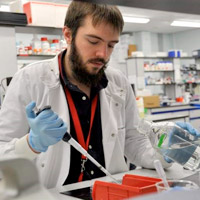 Matthew Dunn, an EPSRC funded PhD student in the CDT for Regenerative Medicine, will be presenting his work  to Members of Parliament and a panel of expert judges on 7 March as part of the SET for Britain competition in the Biological and Biomedical Sciences area.

SET for BRITAIN aims to encourage, support and promote Britain's early-stage and early-career research scientists, engineers, technologists and mathematicians who are an essential part of continuing progress in and development of UK research and R&D. The competition currently attracts around 500 entrants, of whom only 35% are selected to present their work in Parliament. Matthew’s poster will be judged against dozens of other scientists’ research in the only national competition of its kind.

The work, with Dr Paul Roach and Professor Rosemary Fricker, is a neuroscience project concerning the development of an in vitro model of the basal ganglia. Essentially the basal ganglia is the area of the brain that, when damaged, can be responsible for Parkinson's and Huntington's diseases, and so there is a lot of focus on developing any models that can be used to gather information about the basal ganglia, in order to learn more about how these diseases are caused, and how they can be prevented.

SET for BRITAIN Awards are made on the basis of the very best research work and results by an early-stage or early-career researcher together with their ability to communicate their work to a lay audience. Judged by leading academics, the gold medalist receives £3,000, while silver and bronze receive £2,000 and £1,000 respectively.