Austrian election. A country turns its back on a political cartel. 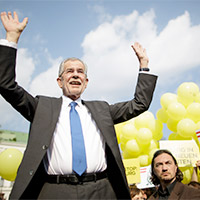 The second round of Austria’s presidential election has finally produced a winner. The international media was captivated by this election thanks to the serious prospect of post-war Europe’s first far-right head of state: the softly-spoken 45-year-old Norbert Hofer MP, candidate of the Freedom Party (FPÖ) once led by the late Jörg Haider.

Yet after the postal votes had been counted, it turned out that Austria had instead picked 72-year-old Alexander van der Bellen, the former chairman of the Green Party, by a razor-thin margin of only 31,026 votes.

The result was welcomed by Austrians who feared an FPÖ president would have tarnished the country’s image, and outsiders who worried that a Hofer victory might encourage their own populists.

Exit polls suggest Hofer’s electoral coalition was disproportionately male, rural, blue-collar, pessimistic about the future, and equipped with only basic or vocational education. By contrast, van der Bellen’s was disproportionately female, urban, and white-collar; his voters were four times more likely than Hofer’s to be graduates, and much more optimistic about their personal future quality of life.

Given these figures, it’s tempting to read the election as a contest between winners and losers of modernisation, and between the candidates’ diametrically opposed views on migrants, asylum seekers, and Austria’s future. But the bigger story, which will have a more enduring impact on the country, is the massive rejection of post-war Austria’s cartel-style politics.

Van der Bellen will be the first president not nominated by the two parties which have governed Austria since 1945: the Social Democratic Party of Austria (SPÖ), and the Austrian People’s Party (ÖVP). Usually running the country as a coalition, they established an intricate system of proportional division of spoils and consensual decision making. To underpin their elite cartel, they built two of the world’s most densely organised political organisations.

For decades, the strategy worked. Their cooperation helped Austria reach some of the highest levels of growth, lowest inflation and lowest unemployment among all the OECD countries, and until the 1990s, the SPÖ and ÖVP regularly shared 90-95% of votes and seats.

But now, the cartel’s sociological rationale for governing Austria has evaporated.

Austrian society is no longer fragmented into subcultures. Partisanship and party membership have plummeted, and voters are much less predisposed to accept a government run by an elite cartel. Dissatisfaction with the two-party system and its much-reduced capacity to deliver the material benefits its clients had come to expect was a major driver behind Haider’s rise in the late 1980s, and his mission to rebrand the FPÖ as a populist party.

The SPÖ and ÖVP’s combined electoral support has shrunk accordingly: at the 2013 general election, it stood at only just over 50% of the vote, and it’s been even lower in some subsequent opinion polls, which have regularly been led by the FPÖ – often by a 10-point margin. Most observers predict the SPÖ and ÖVP will fail to win even a plurality of votes at the next general election, due in 2018.

The most successful claimant to the role of “tribune of the people” is currently Heinz-Christian Strache, who has led the FPÖ since 2005. He has successfully exploited the eurozone’s sovereign debt crisis to stir up populist anger, and in the last 12 months, has made hay of the migrant and refugee crisis. These topics have come to dominate Austrian politics, and public opinion on them is increasingly polarised.
The FPÖ’s Norbert Hofer (left) and Heinz-Christian Strache. EPA/Christian Bruna

But just as a Hofer victory would not have marked a dramatic shift to the right, so van der Bellen’s does not denote a dramatic swing to the left. Instead, the election signals growing polarisation and a further hollowing out of the political centre long occupied by the SPÖ and ÖVP. With a swelling majority of voters angry at or disappointed by politics, the governing parties will struggle to stop their steady decay.

The scale of the shift is remarkable. Hofer and van der Bellen both captured by far the highest vote shares their respective parties have ever achieved. This will greatly boost parties' legitimacy. In the second round of the presidential vote, well over half of voters chose a Green or FPÖ candidate for the first time – and in the first round, the SPÖ and ÖVP candidates each received a derisory 11%.

Two weeks after that humiliation, Werner Faymann resigned as both SPÖ chairman and chancellor, not just because of the result, but because he was unable to resolve growing internal conflict over migration policy and whether to maintain the formal policy of not co-operating with the FPÖ.

The unpopular chancellor’s resignation arguably helped tip the election’s balance against Hofer. Its timing meant his replacement, Christian Kern, was selected and sworn in by the outgoing president rather than a new one – greatly reducing the risk of a President Hofer dismissing the moderate government, as he had threatened.

Be that as it may, it remains to be seen if Kern can revitalise the demoralised and divided SPÖ. He urgently needs to raise the coalition’s spirits and end its incessant squabbling and immobility. Should he fail, the next general election could see the FPÖ re-enter government, which could be the fatal blow to Austria’s cartelised political system.

Throughout his campaign, van der Bellen said if elected president, he would refuse to swear in an FPÖ Chancellor. But delivering on that would be tough if an FPÖ-led coalition assembles a parliamentary majority – and for his part, Hofer has already suggested he might stand again at the next presidential election. Austria’s political upheaval seems guaranteed to continue.