A Surgical journey: a timeline of advancement in surgical training and cancer treatment 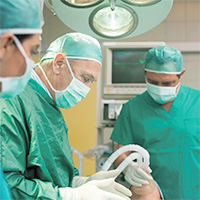 Professor Robert Kirby, Professor of Clinical Education & Surgery at Keele University, will give the next lecture in Keele's programme of Inaugural Professorial Lectures 2015-16, on Monday, 18 January 2016, in the Westminster Theatre, Chancellor's Building, on the University campus. The title of his lecture is: "A Surgical journey: a timeline of advancement in surgical training and Cancer treatment".

The lecture will look at three areas;  It will describe medical and surgical training in the 1970s and 80s and compare it with training today. The effects, intended and otherwise, of reduced working hours for trainee doctors will be explored.

The modern management of patients with breast cancer will be described, and comparisons made with previous management approaches, areas of research and change, and possibilities in the future.

The development of the medical school at Keele will be described, with particular emphasis on student learning in clinical environments - together with the challenges and achievements of developing a first class teaching environment in one of the busiest hospitals in the UK.

Robert Kirby qualified from Birmingham University in 1977.  After initial jobs in Birmingham he moved to London and Surrey, in surgical training posts, before returning to Birmingham as a Transplantation Fellow in 1984, researching into liver transplantation He moved to Stoke-on-Trent in 1986. He was appointed as a Consultant General Surgeon to the North Staffordshire Hospital in 1991 and as a Clinical Senior Lecturer at Keele the same year.  His main clinical interest is in breast cancer and colorectal disease.  He was the first Director of Admissions for the new Medical School, Undergraduate Academic Director of Surgery and was appointed Hospital Dean of the University Hospital in 2009.

This lecture is free and open to all.