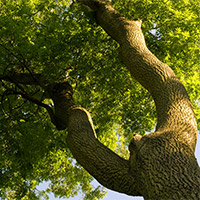 Between the fungal disease ash dieback and a bright green beetle called the emerald ash borer, it is likely that almost all ash trees in Europe will be wiped out...

The future for ash – the tree that gave us food, fuel and the Sweet Track, one of the oldest roads in the world – looks bleak, according to a new survey of its biology and ecology. The review by tree expert Dr Peter Thomas is the largest-ever survey of this much-loved tree and is published today in the Journal of Ecology.

Ash (Fraxinus excelsior) is native throughout most of the British Isles. It is an important urban tree in our towns and cities, is the second most abundant tree (after oak) in woodland, and outside woods there are 2.2 million ash trees in Britain. Ash is our most common hedgerow species and the length of woody linear features (hedgerows and tree lines) composed of ash in Great Britain is almost 100,000 km.

Ash had been thriving in Europe until recently thanks, paradoxically, to air pollution. Nitrogen pollution has acted as a fertiliser and climate change has also aided ash because of ash is drought tolerant, able to cope with lower rainfall, and sensitive to spring frosts and so benefits from warmer springs.

But, the survey warns, ash faces several serious problems, including the immediate threat of ash dieback and the 'potentially devastating' emerald ash borer, which is spreading west across Europe.

According to Dr Thomas of Keele University: “Between the fungal disease ash dieback and a bright green beetle called the emerald ash borer, it is likely that almost all ash trees in Europe will be wiped out – just as the elm was largely eliminated by Dutch elm disease.”

Ash dieback causes death of leaves, branches and eventually the whole tree. Caused by the fungus Hymenoscyphus fraxineus, it was first seen in eastern Europe in 1992 and in Britain in 2012. The disease now covers more than 2 million km2 from Scandinavia to Italy. In assessments of the likely impact of ash dieback in Britain the worst-case scenario is 95% mortality of ash.

Recent research suggests that some ash clones are resistant to ash dieback, offering hope that breeding programmes could produce trees able to survive the fungus. But resistance to dieback will not protect trees against the emerald ash borer if it reaches Britain.

Like ash dieback, the emerald ash borer Agrilus planipennis is native to Asia. It was accidentally introduced to North America in 2002, where it has killed millions of ash trees. Recorded in Moscow in 2003, it is spreading west and is believed to have reached Sweden. The adult beetles feed on ash leaves and do little damage, but the larvae bore under the bark and into the wood, killing the tree.

According to Dr Thomas: “Our European ash is very susceptible to the beetle. It is only a matter of time before it spreads across the rest of the Europe – including Britain – and the beetle is set to become the biggest threat faced by ash in Europe – potentially far more serious than ash dieback.”

The loss of ash would change our countryside and our biodiversity. More than 1,000 species are associated with ash or ash woodland including 12 birds, 55 mammals, 78 vascular plants, 58 bryophytes, 68 fungi, 239 invertebrates and 548 lichen species, many of which are threatened or endangered and likely to decline in number and potentially become locally extinct.

“Of these, over a hundred species of lichens, fungi and insects are dependent upon the ash tree and are likely to decline or become extinct if the ash was gone. Some other trees, such as alder, small-leaved lime and rowan, can provide homes for some of these species but they would look different in the landscape. If the ash went, the British countryside would never look the same again,” he says.

Ash thrives best on chalky, alkaline soils. The trees can be male, female or hermaphrodite. The bark is grey – smooth in young trees, furrowed in mature trees – and the buds black. Ash coppices strongly after felling and is a prolific seed former. Its seeds can form the majority of the diet of bullfinches.

Ash, along with other deciduous trees, is thought to have occupied northern Europe including Svalbard and Greenland during the Cretaceous period, spreading into central Europe following periods of cooling. By 5000 years ago, ash was common in Britain, especially in northern England.

Ash has a long cultural history, and in Norse mythology forms the world ash tree of Yggdrasil. Ash was commonly used as firewood by Neolithic and Mesolithic people in France, Belgium, The Netherlands and the UK. Today, it is still highly prized as firewood because of its high levels of oleic acid, a flammable fatty acid that means it burns even when green.

Ash has also served us well in other ways, originally through the use of coppiced wood. Some 10% of the coppiced wood used in the Sweet Track was ash. The Sweet Track is a 6,000 year-old causeway that ran for 2km across the Somerset Levels. The wooden walkway was supported by wooden poles driven into the waterlogged soil.

The naturalist Oliver Rackham believed ash was a low-status building material, since it was not used in church carpentry. Instead it was used in wattle. Ash was also used for shipbuilding (boat frames and tenon pegs), and musical instruments, particularly guitars. A relative of the European ash – the North American swamp ash – was used to make the legendary 1950s Fender Stratocasters used by Buddy Holly, Jimi Hendrix and Hank Marvin of The Shadows.

Ash figured in our diets and that of our livestock. Ash foliage was used as a year-round fodder for sheep and goats, ash keys (fruits) were pickled in vinegar for human use, and humans have also eaten a sweet exudate – manna – from damaged bark, which acts as a sweetener and mild laxative.

Used in herbal medicine since the time of Hippocrates, its leaves and bark have been used to treat rheumatism, inflammation, diarrhoea, dysentery, gout, gallstones and intestinal worms. Soluble glycosides from ash seeds and fruits can reduce blood glucose levels without significantly affecting insulin levels, so can be used to treat hypertension, obesity and diabetes.

Notes for editors
1. For more information contact Dr Peter Thomas, Keele University, tel: +44 (0)1782 733497, email: p.a.thomas@keele.ac.uk. Dr Thomas is also a Bullard Fellow at Harvard Forest where he wrote the paper.
2. For copies of the paper contact Becky Allen, British Ecological Society Press Officer, mob: +44 (0)7949 804317, email: beckyallen@ntlworld.com or Chris Stone, Press Officer, Keele University, telephone: 01782 733375, c.w.stone@keele.ac.uk
3. Journal of Ecology is published by Wiley-Blackwell for the British Ecological Society. Contents lists are available at www.journalofecology.org. The paper is part of the Biological Flora of the British Isles series, which since 1941 has published detailed reviews of more than 300 British plant species from the Stinging Nettle (Urtica dioica) to the the Ghost Orchid (Epipogium aphyllum), Britain’s rarest plant.
4. The British Ecological Society was founded in 1913 and is the oldest ecological society in the world. A learned society and registered charity, the BES supports ecological science through its five academic journals, other publications, events, grants and awards. For more information visit www.britishecologicalsociety.org