​ ​The Science of Santa 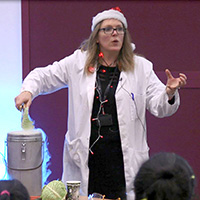 ​Ever wondered how Santa makes it around the entire world in one night?​ ​
How he survives the temperatures everywhere from Africa to the Antarctic?​ Then w​atch Dr Sharon George’s ever-popular ‘Science of Santa’ talk and hear how the famous journey is made​.​

How does Santa visit 336 million homes?

"There are 2.2 billion children in the world according to Unicef" explains Dr Sharon George. ​"That is just too many to visit in one night using conventional transport. The reality is that not all children are good and not all children believe in Santa. His job is also made a bit easier by the fact that many children have brothers and sisters. By our calculations, Santa has to make around 366 million stops."

"Assuming a 7.5 million kilometer journey, he has to travel at 156,579 kilometers per hour. This is faster that the speed of sound. We should hear deafening sonic booms all over the planet."

"This has led us to examine other theories and we think the key to how this task might be possible lies in the realms of quantum physics."

"He could be using quantum tunneling to 'appear' on the other side of objects (energy barriers)."

"Another theory that is of interest is the superposition of states that we see in wave-particle duality where particles can to exist in simultaneous positions at the same time until they are observed."

"Relating this to Santa, we could have multiple Santas that all co-exist, all over the world, until one of them is observed. At this point the waveform collapses and the Santa being observed is fixed in space and time. All other Santas disappear spoiling everyone else's Christmas!"