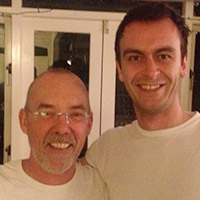 Mike Jackson, a former Keele student and co-founder of LGSM (Lesbians and Gay Men Support the Miners), which was recently immortalised in the hit movie Pride, is coming back to Keele on Thursday 19 November. As part of his day at Keele he will be giving a Q&A about the work of LGSM, and the way its story has been re-told in the film. This will take place in CBA1.102 from 5.00 - 6.30 pm; entry is free and open to all.

Mike was born into a working-class family in Accrington in 1954. His father died when he was only eight, so his Mum had to bring up his older sister and Mike as a single parent with numerous unskilled jobs, but supported by the then relatively new welfare state. Mike left school at 16 with just four O levels. However, he already had a passion for horticulture and found a wonderful job in a garden in Worcestershire, leaving home to work there. He was nurtured by the gardeners there and they encouraged him to apply to Kew. He got a place on the three-year Kew Diploma in Horticulture. It was while at Kew that he ‘came out’. Towards the end of his second year, he decided that horticulture was ‘trivial, because it was my job to save the world!’ He handed in his resignation, but his supervisor persuaded him to stay and also helped him to get to university to study sociology. Mike came to Keele in 1976 to take the famous Foundation Year, and then completing his four-year honours degree in Sociology and American Studies. As he puts it: ‘I was on fire when I arrived: full of enthusiasm, opinion, ignorance and naivety. The academic staff guided, cajoled, nurtured and developed me. I am forever indebted to them and to Keele’s liberal admissions policy.’

After Keele he returned to horticulture, which remains a passion. These days, as he puts it, ‘I’m gardening and causing trouble in equal amounts.’ In between time, he co-founded LGSM, as re-told in Pride. The film tells the fascinating story of how radical LGBT activists created an alliance with miners from south Wales during the 1980s miners’ strike. Mike is played in the film (in which he is nicknamed ‘Accrington’) by Joseph Gilgun, who has played Woody in the film and several TV series, This is England.

Apart from the Q&A Mike will be sitting in on a lecture and seminar about Pride, as part of the Film Studies module ‘Popular British Cinema’, delivered by Dr Beth Johnson, Programme Director for Film Studies. In the evening he will be going on to a series of events hosted by Keele Students Union, including work with the Keele LGBT Society.

Photo: Mike and actor Joseph Gilgun, who played Mike in the film.