New sports provision to be named after inspirational soccer coach 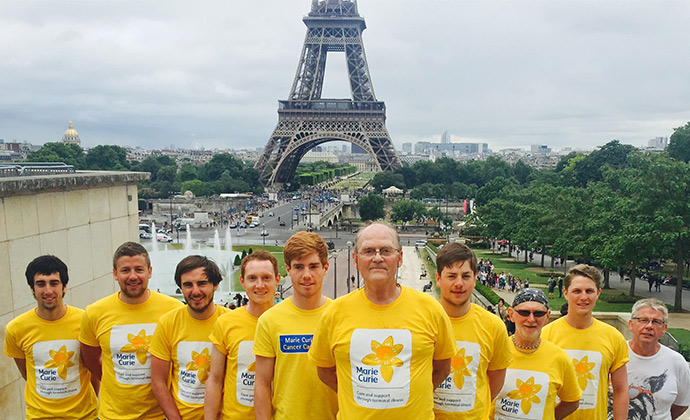 A £1.7 million improvement and upgrade development at Keele University Sports Centre is to be named after First Team Coach for Keele University Football, Keith Harrison, who sadly died last weekend.

Work on the Keith L. Harrison Sports Park (Sport, Benevolence, Charity and Friendship) starts on Monday 7 September and will see the creation of a full size synthetic football pitch (with the latest third generation, or 3G, articifical turf), a smaller training area of the same synthetic construction, re-configuration of a section of the tennis court area to provide courts for basketball and beach volleyball, and upgrading of the existing astroturf area, surrounding access roads and pathways.

The honour recognises Keith's commitment to sport at Keele over nearly 20 years, despite suffering a heart attack last year and in 2013 contracting a rare melanoma that required an eye to be removed. Throughout everything Keith continued to support Keele students and be heavily involved in charity work. Earlier this year he managed to join the Keele 'football in charity' fundraising event, cycling from Keele to Paris - cycling the final stretch down the Champs-Elysees.

Silverdale-born Keith joined the National Coal Board at the age of 15, working underground at 16, but left to embark on a distinguished career with the RAF, Staffordshire Police, the Royal Protection team and the British Army.

Keith always maintained his family connections with Newcastle and in 1998 made his first active link to Keele. Making one of his regular runs around the entire campus, he stopped briefly to watch a football match. Keith’s coaching credentials were impeccable, and included five years in the Manchester United youth system, under Sir Alex Ferguson. His calibre was apparent and he was invited immediately to become First Team Coach for Keele University Football, a position held up to his death .

As well as coaching Keele teams in the BUCS league against other universities, Keith also coached teams at the highest levels of the Staffordshire Football Association. Keele’s young players are sometimes praised for their skill and style by their more seasoned opposition, but they are commended more often for their poise and exemplary conduct on and off the pitch.

He was awarded an Honorary Doctorate by Keele University in 2014 in recognition of his being a role model for Keele students, especially those in involved in sport, his contribution to the creation of the annual Varsity competition and his support for local charities, especially the Donna Louise Trust and Caudwell’s Children’s Trust.

Michael Huss, Sport Development Manager at Keele, said: "Keith was an inspiration to us all. He was not just a coach to our students; he was a mentor and a friend. It is an honour to name these fantastic new facilities after Keith and I hope, like Keith, that these facilities can inspire students for years to come."