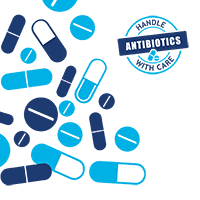 It would be very difficult to imagine a world without antibiotics, it would be a massive step backwards in health care and patient well-being...

Keele University has signed up to the World Antibiotic Awareness Week campaign.

The theme of the WAAW campaign, Antibiotics: Handle with Care, reflects the overarching message that antibiotics are a precious resource and should be preserved. They should be used to treat bacterial infections, only when prescribed by a certified health professional. Antibiotics should never be shared and the full course of treatment should be completed – not saved for the future.

Antibiotics are essential medicines for treating bacterial infections in both humans and animals but antibiotics are losing their effectiveness at an increasing rate. Bacteria can adapt and find ways to survive the effects of an antibiotic. They become ‘antibiotic resistant’, so that the antibiotic no longer works. The more antibiotics are used inappropriately or where not required, the more resistance will occur.

Professor Nigel Ratcliffe, Head of the School of Pharmacy at Keele university, said: "It would be very difficult to imagine a world without antibiotics, it would be a massive step backwards in health care and patient well-being. This is an extremely important campaign. Antibiotics are precious and cannot be taken for granted. Despite huge research effort to discover new antiobiotics, it is proving extremely difficult and this is a real concern."