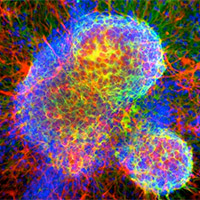 This remarkable image, taken by Keele postgraduate research student, George Joseph, has been recognised in ‘Picturing Parkinson’s’, a national competition held by Parkinson’s UK to celebrate the beauty and art in the research they fund.

George, School of  Computing and Mathematics, was shortlisted for his image ‘Blazing Neurons’, which depicts the complexity of developing brain cells. His research investigates the environmental elements that contribute to growing stem cells for therapeutic treatments for people with Parkinson’s.

Parkinson’s UK funded researcher George said: "I’m extremely flattered to be recognised by Parkinson’s UK and excited to share my research in a different way. I’m very lucky as not everyone gets to go to work and see amazing things like this on a daily basis.”

The annual competition is held in memory of scientist Dr Jonathan Stevens, who had Parkinson’s and passed away at the age of 34 in 2013. 127,000 people are living with Parkinson’s in the UK – and there is currently no cure. Parkinson’s UK has invested more than £70million in ground-breaking Parkinson’s research to improve treatments and find a cure.

Parkinson’s UK Director of Research Dr Arthur Roach said of the winners: “Irish writer Jonathan Swift once said vision is the art of seeing what is invisible to others – this is what our Parkinson’s researchers are doing each day in the lab, discovering new scientific breakthroughs and taking us closer to a cure.

“It’s great that our researchers unpick the complexities of Parkinson’s science and provide images that give us a different perspective on how we’re working to develop new and better treatments. They prove that science is beautiful.”

His supervisory team is Theo Kyriacou, Rose Fricker and Paul Roach, with funding support from the EPSRC CDT in regenerative medicine.