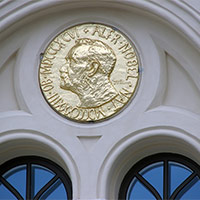 Iraq Body Count (IBC), a database of violent civilian deaths in Iraq since the U.S.-led invasion of the country in 2003, which was founded in Keele and led by members of the University, was considered in the shortlist of five contenders for the 2015 Nobel Peace Prize to be announced today. Iraq Body Count was founded as a human security initiative in 2003 by Professor John Sloboda (Emeritus Professor of Psychology), and two other members of the university involved from the start, Professor Bulent Gokay (SPIRE) as senior consultant and Kay Williams (now retired from university library) as senior researcher.  Twelve years after its foundation, Iraq Body Count still provides daily updates and regular analysis of civilian casualties in Iraq, documenting and chronicling casualties in its website by its senior researcher and analyst Dr Lily Hamourtziadou, a Keele resident and former undergraduate and PhD student of SPIRE.