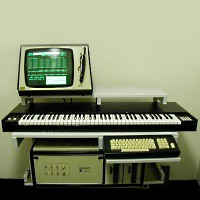 To recognise the 30 year anniversary of the ground-breaking album MIRAGE, outstanding Keele University alumnus Andy Quin will give an illustrated talk about the advent of digital sampling as applied to production music accompanied by live performance. There will be the opportunity to experience a live performance with the Fairlight CMI as well video and audio examples of the pioneering music recorded at Keele University during the 80's onward that has found its way into film and TV productions all over the world.

Andy was a pioneer of computer sampling back in the 70's and early 80's with the Fairlight Computer Musical Instrument (CMI). His early albums on vinyl are now collector’s items. DWCD 0001 Mirage was the first CD of the World's first music library released digitally and was realised almost entirely on the Fairlight CMI. His work was much emulated and his synthesizer tracks became some of the most broadcast music for TV in the world at that time. He has over 1000 published titles and thousands of broadcasts all over the globe each year and is probably one of the most prolific and successful production music composers; you will almost certainly have heard his music even if you don’t recognise the name.

This year is the 30th anniversary of the release of Andy Quin's groundbreaking CD, Mirage. It was recorded on the Fairlight CMI, the world's first sampling computer musical instrument. This instrument was the forerunner to solid-state digital sampling and recording systems such as those used in modern computers, mobiles and ipods etc. The album DWCD0001 was the first CD of the World's first Production Music Library released digitally. Pressed by Nimbus Records, (the first company in the UK to master cd's). It has enjoyed considerable international success. Tracks from the album are currently being broadcast in Japan but in the UK the music was probably best known for its use on the early ITV Oracle adverts back in 1985;

http://youtu.be/Ey26Z7Bk5Z8
The album hailed a new era of digital recording and was one of the very first to use digital computers, samplers and sequencers that now completely dominate modern music production for film and television. Some of the
early tracks recorded at Keele during the 80's ranged from one of the Oxo family ads to Fairlight tracks that were used extensively in the US on the NFL films of the Superbowl and other American Football events. One of them even featured as the music for the Black Hole ride at Alton Towers for many years!