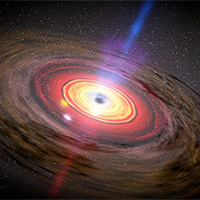 This one though is really too big for its boots – it simply shouldn’t be possible
for it to be so large”, Dr Jacco van Loon, Keele, lead author on the paper.

The central supermassive black hole of a recently discovered galaxy has been found to be far larger than should be possible, according to current theories of galactic evolution. New work, carried out by astronomers at Keele University and the University of Central Lancashire, shows that the black hole is much more massive than it should be, compared to the mass of the galaxy around it. The scientists publish their results in a paper in Monthly Notices of the Royal Astronomical Society.

The galaxy, SAGE0536AGN, was initially discovered with NASA's Spitzer Space Telescope in infrared light. Thought to be at least 9 billion years old, it contains an active galactic nucleus (AGN), an incredibly bright object resulting from the accretion of gas by a central supermassive black hole. The gas is accelerated to high velocities due to the black hole's immense gravitational field, causing this gas to emit light.

The team has now also confirmed the presence of the black hole by measuring the speed of the gas moving around it. Using the Southern African Large Telescope, the scientists observed that an emission line of hydrogen in the galaxy spectrum (where light is dispersed into its different colours – a similar effect is seen using a prism) is broadened through the Doppler Effect, where the wavelength (colour) of light from objects is blue- or red-shifted depending on whether they are moving towards or away from us.

The degree of broadening implies that the gas is moving around at high speed, a result of the strong gravitational field of the black hole.

“Galaxies have a vast mass, and so do the black holes in their cores. This one though is really too big for its boots – it simply shouldn’t be possible for it to be so large”, said Dr Jacco van Loon, an astrophysicist at Keele University and the lead author on the new paper.

In ordinary galaxies the black hole would grow at the same rate as the galaxy, but in SAGE0536AGN the black hole has grown much faster, or the galaxy stopped growing prematurely. Because this galaxy was found by accident, there may be more such objects waiting to be discovered. Time will tell whether SAGE0536AGN really is an oddball, or simply the first in a new class of galaxies.

An image of the galaxy SAGE0536AGN, from the Vista Magellanic Clouds survey.
The galaxy is the elliptical object in the centre of the frame.

A still frame from a movie, illustrating an active galactic nucleus, with jets of material flowing from out from a central black hole. Credit: NASA / Dana Berry / SkyWorks Digital (See http://www.nasa.gov/centers/goddard/mov/103893main_3SpeedyHotSpots.mov for the full movie.)

The paper can be downloaded from
http://mnras.oxfordjournals.org/content/453/3/2341

The Royal Astronomical Society (RAS, www.ras.org.uk), founded in 1820, encourages and promotes the study of astronomy, solar-system science, geophysics and closely related branches of science. The RAS organises scientific meetings, publishes international research and review journals, recognizes outstanding achievements by the award of medals and prizes, maintains an extensive library, supports education through grants and outreach activities and represents UK astronomy nationally and internationally. Its more than 3800 members (Fellows), a third based overseas, include scientific researchers in universities, observatories and laboratories as well as historians of astronomy and others. Follow the RAS on Twitter via @royalastrosoc