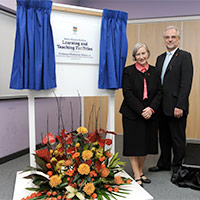 One of Keele University's most iconic buildings from the 1950s has undergone a £2.1million transformation to create flexible modern spaces for teaching and learning to serve up to 450 students.

The project was part funded from a £849,000 contribution from HEFCE and will be officially opened by the Chief Executive of HEFCE, Professor Madeleine Atkins CBE, on Wednesday 11 November, 2015.

The Walter Moberly Building - named after a British academic who, as Chairman of the University Grants Committee, played a significant role in the creation of Keele University - was originally built as the Conference Hall and opened in 1954.

It was an essential feature of the Keele ‘experiment ‘ for the entire student body in the Foundation Year to gather there for lectures. The building was also vital to the social and cultural activities of the community of scholars, being used for lectures, plays, debates, concerts and other events requiring a large auditorium.

The new development provides a multiple large flexible teaching space in a return in spirit to the original use of the building.

External building work was limited, except for the part replacement of windows, reinstatement of a former secondary entrance for disabled use and upgrading of the main entrance steps, whilst keeping the original doors, lobby and distinctive art deco style main staircase.

Internally the refurbishment has required substantial alteration works, with the removal of the entire first floor level to facilitate an increased ceiling height at ground floor and revised teaching layout. A new wider steel and glass staircase together with a new lift and additional toilet block has been installed together with power assisted doors for accessibility. Upstairs a totally new corridor has been created along with the retention of several original features including the main staircase and the original hall ceiling in one of the upper floor seminar rooms.

The building was originally designed by J A Pickavance as the second of four buildings in red brick and neo-Georgian style to form a quadrangle. The first building completed was the New Teaching Block (later R H Tawney Building) and this building was the second – originally named the Conference Hall. The third and fourth of the planned buildings were not built.

The Conference Hall was renamed the Walter Moberly Hall in May 1960 and served as an on campus venue for the conferral of degrees and awards. It was converted and renamed the Walter Moberly Building around 1980 and was then used for many purposes - administration, student support and teaching. The Senate Room remained in use but the stage, proscenium arch and balcony were discontinued.