Professor Richard Luther, Convenor of the Keele European Parties Research Unit (KEPRU) was in Rome last week at the invitation of the social-democratic Foundation for European Progressive Studies.

It had co-organised an international seminar on "Democratic Legitimacy and Political Leadership in the European Union", attended by numerous senior European politicians and academics.

Invited because of his expertise on contemporary political parties, Professor Luther had been requested to participate in a discussion on 'The Future of European Parties'.

His contributions included reporting the findings of KEPRU research on the impact of EU membership on the distribution of political power within national political parties, as well as his research on social-democratic responses to the challenge of the populist radical right.

He presented 'A Europeanization Research Perspective on Sub-National Parliaments in the European Union', at Esterhazy Castle, Eisenstadt, Austria.

This was a workshop on 'Subnational Parliaments in an EU Multi-level Parliamentary System: Taking Stock of the Post-Lisbon Era', organised by the Institute for Political Research of Tubingen University, Germany, and supported by the EU Commission and FosterEurope.

The following day he presented the paper 'Financial Crisis, Democratic Legitimacy and the Role of Transnational Parties', at the headquarters of the German Social Democratic Party (SPD) in Berlin, Germany.

This was a workshop on 'Strengthening democracy and ensuring social progress in Europe of the 21st century', part of the Next Left Research Programme organised by the Foundation for European Progressive Studies (FEPS), the SPD and the Renner Institute of the Austrian Social Democratic Party. 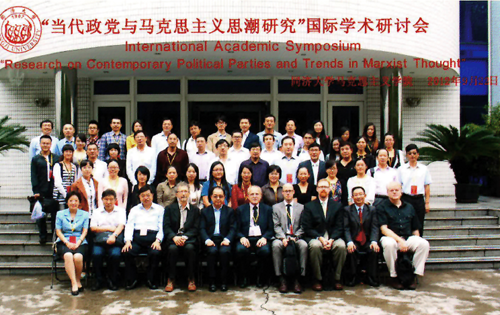 Professor Richard Luther has recently returned from a week-long visit to Shanghai, where he delivered a paper on 'West European Social Democratic Responses to the Challenge of the Populist Radical Right' at Tongji University's international conference on 'Research on Contemporary Political Parties.'

While in Shanghai he presented other research findings at seminars held at Fudan University and at Tongji's Institute for Germany and the EU.

At these seminars he spoke about the results of a project recently conducted by the Keele European Parties Research Unit on the organisational adaptation of Western European political parties to EU integration.

A delegation from Tongji University is scheduled to visit SPIRE in early December.

The lecture was chaired by the Deputy Vice-Chancellor, Rama Thirunamachandran.

Mainstream political parties in Western Europehave supported membership in the European Union as well as initiatives in further integration over the past several decades. However, these actions have not been complemented by a political discourse that justifies this continuing support to their respective electorates. This lecture addresses the question of 'what prevents mainstream parties from developing a legitimising discourse for their support of the EU and integration initiatives'. It situates the answer within the dynamics of national competitive party systems, though how long the status quo may persist, especially in light of the current crisis in the eurozone, is open to question. 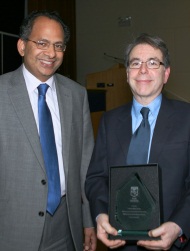 The lecture was chaired by the Vice-Chancellor, Professor Nick Foskett.

Political parties have for over 100 years played a central role in the theory and practice of modern democracy, constituting a vital link between the demos and the politicians to whom the exercise of the affairs of the state is temporarily entrusted. There is thus much to be said for Schattschneider's 1942 dictum that 'democracy is unthinkable save in terms of parties'. Yet political parties have always been contested institutions. The media frequently portrays them as at best untrustworthy and at worst corrupt, whilst even nuanced academic analyses assert that they are becoming increasingly redundant. Drawing on his work on contemporary western European party politics, Professor Luther will explore current research into the changing role of political parties, identify the main challenges they face and consider their likely future shape. 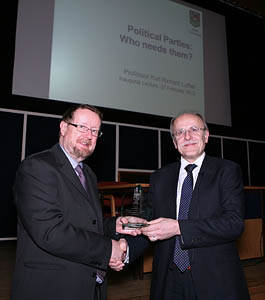 Professor Luther with the Vice-Chancellor, Professor Nick Foskett, at his inaugural

Consensus Workshop on Extreme Right Parties in the Local Area

Contradictions and Unintended Consequences in British Public Policy During the Economic "Golden Age": 1951-73

The German Left Party: Road to Nowhere or Force for Change?

to discuss and debate issues arising from the recent election.

Conceptualising party strategies in Western Europe: a framework for analysis

European Network for the Analysis of Political Text (ENAPT) Workshop

Are Mainstream Parties Responsible for the Rise of the Extreme Right?'

Church Involvement and Voting for the West European Radical Right