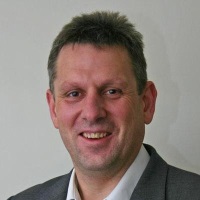 Professor Mike Watkinson has taken up his position as Keele’s new Head of the School of Chemical and Physical Sciences.

Professor Watkinson joins Keele from Queen Mary, University of London (QMUL) where he was Director of the QMUL Doctoral College, Deputy Dean for Research for the Faculty of Science and Engineering, and was previously Head of the Division of Chemistry and Biochemistry.

He is a synthetic chemist specialising in small molecule fluorescent probes for the detection of zinc, with an interest in novel functional ligand systems and how these can be applied to improve the environmental sustainability of a range of everyday processes.

In 1991 Professor Watkinson gained a first class degree in Chemistry from St Andrew’s University, and a PhD from the Victoria University of Manchester. In 1995, he embarked on a Royal Society European Post-Doctoral Exchange Fellowship in Santiago de Compostela, and then was appointed as a Research Associate at the University of Manchester Institute of Science and Technology (UMIST). In 1997, he became Honorary Lecturer at UMIST and was then appointed as a Lecturer in Inorganic Chemistry at QMUL in 1998. Over the years, he was promoted to Senior Lecturer and Reader, and became Professor in Synthetic Chemistry in 2010. In 2012, Professor Watkinson was appointed Deputy Dean of the Faculty of Science and Engineering and Doctoral College Director in 2016.

Professor Watkinson was also proudly a governor of Drapers’ Academy, based in Harold Hill, a deprived area of Greater London, and co-sponsored by QMUL. The Academy subsequently became part of a Multi-Academy Trust and he was Vice-Chair of Governors and also Vice-Chair of the Trust.

Professor Watkinson joins the School of Chemical and Physical Sciences at an exciting time with work underway on the Central Science Laboratories (CSL), and the Lennard-Jones repurposing project which will see the redevelopment and expansion of the building.

“I think my biggest challenge is going to be managing the move of teaching to the CSL and the Lennard-Jones repurposing project, but these are also the most exciting opportunities for the school. I was heavily involved in the design of Drapers’ Academy which won a Royal Institute of British Architects award and is generally acknowledged as an excellent building, so I am hoping to bring some of that experience to the Lennard-Jones project.

“I joined Keele for many reasons, including the NSS, TEF Gold, the CSL project, the repurposing of Lennard-Jones building, but mostly the people I met when I interviewed and in subsequent visits. The area is also a bit of a draw as I am from Lancashire originally so this almost feels like coming home. At my previous institution I really enjoyed mentoring younger colleagues and I am hoping to be able to continue to do some of that here and help them develop their academic careers.”