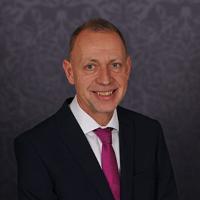 Prior to this, Professor Ormerod had been Pro Vice-Chancellor (Research and Enterprise) at Keele University since August 2011, having previously been Head of the School of Physical and Geographical Sciences at Keele since its formation in 2005, and of the School of Chemistry and Physics.  Professor Ormerod has been at Keele since 1992, when he was appointed to a Lectureship in Chemistry.  In 1997 he was awarded an EPSRC Advanced Research Fellowship and was promoted to Professor of Clean Technology and Inorganic Materials Chemistry in recognition of his research achievements.

In additional to his role as Deputy Vice-Chancellor and Provost, Professor Ormerod is also the Strategic Lead for Environment and Sustainability at Keele University.

Professor Ormerod’s research interests centre on sustainable processes, heterogeneous catalysis and inorganic materials chemistry, in particular on fuel cells, clean catalysis and utilisation of waste biomass and biogas.  He has received substantial funding from government and industry to support his research, which has been widely published and extensively cited, and given many invited lectures at international conferences and national meetings.  Recently he has extended his research interests to embrace interdisciplinary research in sustainability and sustainable energy and lifestyles, focusing on the barriers to attitudinal and behavioural change in individuals and communities, particularly disadvantaged ones, and interventions which effectively catalyse pro-environmental behaviour.

Professor Ormerod has been actively involved in promoting public engagement and increasing awareness of sustainability, sustainable energy and developing more sustainable lifestyles, for many years, being awarded substantial funding to support this work.  He co-leads the Science for Sustainability group at Keele, which has a nationally leading reputation and has won numerous awards for its highly innovative work in engaging and educating young people and communities in environmental issues and sustainability, increasing public awareness and engagement in sustainability, and promoting pro-environmental behaviour, particularly in educationally and socially disadvantaged communities.

Professor Ormerod graduated in Natural Sciences from Cambridge University, before undertaking his PhD at Cambridge in the area of surface chemistry and heterogeneous catalysis. He was subsequently awarded the Cambridge University Oppenheimer Fellowship, in addition to a College Fellowship, which he held for three years, before being appointed to a Lectureship at Keele.