Keele University is proud to hold an annual reunion to celebrate its Golden Graduates - those who are celebrating the 50th anniversary since their graduation from Keele University or the University College of North Staffordshire.

The Royal Charter of the University of Keele was granted in 1962 and in 2012, to mark the 50th anniversary of this Charter, we launched our first Golden Graduates' Reunion.

Who are the Founding Graduates? 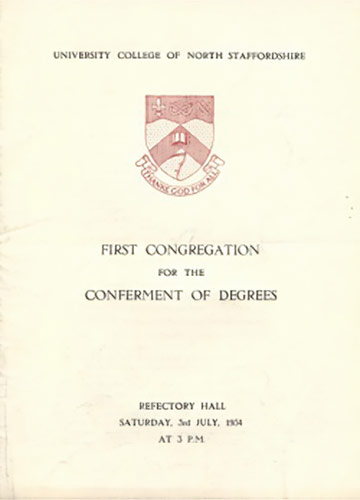 One hundred and fifty-seven students attended the University College of North Staffordshire in October 1950 and the first 150 graduated in 1954. Anyone who was part of that first founding Class is termed a Founding Graduate.

Who are the Pioneers?

The term “Pioneer” refers to the Classes of 1954 to 1961 who attended the University College of North Staffordshire. They and the Founding Graduates founded the Students' Union, the Athletic Union and the Keele Society, and created the heritage and traditions that have exemplified the Keele spirit for all later generations.

Please visit our Past Events page to see photos from our previous Golden Graduates' Reunions.